MMM members may be liable for donations tax

Still no word from Mavrodi, as scheme appears to target poor. Members of the global ‘social financial network’ MMM may find themselves in trouble with tax authorities if the so-called ‘donations’ they make to one another exceed R100 000 in a given tax year.

There are exceptions to this, such as where donations are made to public benefit organisations (charities) or between spouses, but broadly speaking this is the rule.

The person liable for donations tax is ordinarily the donor. If the donor does not pay the tax within three months of making the donation, however, then both the donor and the beneficiary become jointly and severally liable for the tax.

MMM, which advertises potential growth of 30% per month on deposits, claims it is not an investment scheme but rather a platform for the exchange of donations where people send money to each other, in other words, a mutual financial aid network.

“MMM does not offer any return or an interest rate. MMM motivates its members to help each other by providing financial assistance,” MMM recently told Moneyweb.

With members giving and receiving amounts in excess of R200 000 (according to the latest testimonials on Facebook), donations tax would apply.

In terms of the Financial Intelligence Centre Act (Fica), meanwhile – which is aimed at fighting financial crime and with which all financial institutions must comply – transactions that may be relevant to attempted tax evasion must be reported as ‘suspicious and unusual’ to the Financial Intelligence Centre by anyone (including a bank) who ought reasonably to have known or suspected as much.

Since many MMM members appear to be low- to middle-income individuals, a sudden injection of R50 000 into their bank balance (or more) may well be deemed suspicious.

Another point of concern, is the fact that MMM members don’t appear to know who exactly they are transferring money to, since the network is so big. This means that while one member might be using the so-called ‘assistance provided’ to lift themselves out of poverty and fund their children’s education, another member may well be using this assistance to fund human trafficking.

There’s no way of knowing.

No word from Mavrodi

Represented predominantly in emerging markets across the globe, MMM is marketed largely via Facebook, word of mouth and at public presentations. 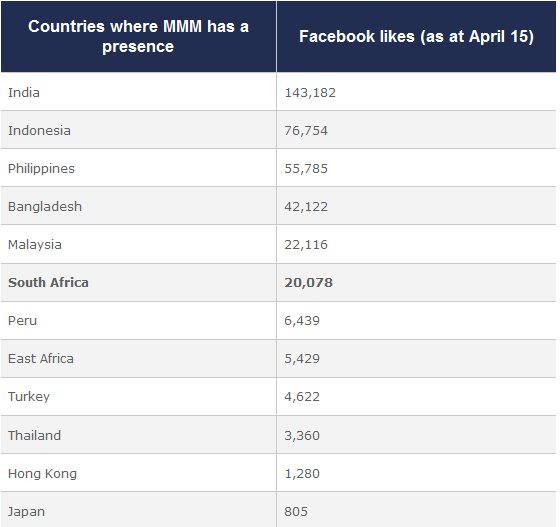 “News arises when there are some problems. If we don’t have any problems there’s no news. Thus from now on I think I won’t be recording video messages weekly. Since, due to the absence of news, it makes no sense. If there are situations requiring my comments I will make my video messages,” he said.Previously providing weekly updates to members via country Facebook pages on how the scheme was progressing, MMM founder Sergey Mavrodi left the following message on a number of Facebook pages on or around March 20 and has not been heard from since:Source: Facebook

Incredibly, Mavrodi does not believe that the shutting down of the Republic of Bitcoin – apparently a ‘synthetic country’, according to MMM South Africa – requires any message or comment from him whatsoever.

In addition, MMM members in South Africa have been complaining of frozen Mavro, which is described as a ‘motivation instrument’ that balances the flow of assistance provided and assistance received between members.

Still, no word from Mavrodi on this.

A convicted Russian criminal who served jail time for fraud, Mavrodi was found guilty in 2007 of defrauding 10 000 investors out of 110 million rouble, worth some $4.3 million at the time, according to the Moscow Times.

The majority of members appear to be poor people in need of financial assistance. Many of them are understandably frustrated with the high fees charged by financial institutions, such as banks, asset managers and stockbrokers, to access affordable and effective savings and investment vehicles.

They are desperate for access to the means of wealth creation, and rightly so.

Tragically, this makes them exceptionally vulnerable to wild promises of 30% returns a month, or 360% a year – illegal in terms of the Consumer Protection Act and hopelessly unrealistic in terms of any accepted wisdom about the compounding of returns on invested capital.

Other members are simply greedy and want to get rich quick, believing that money does indeed grow on trees if you know which trees to pick from.

Since the system appears to be based on the continued growth in new members – no other explanation has been provided as to how the 30%-per-month growth is achieved – it follows that if the growth slows or stops altogether, so will the returns.

“Usually Mavro grows 30% a month. Because Mavro is not a financial instrument, its growth rate can be easily adjusted to balance PH (providing help, inflow) and GH (getting help, outflow). The flow of provided assistance and assistance received will always be kept in balance,” MMM South Africa told Moneyweb.

In other words, if anyone decides to stop ‘providing help’, given that Mavro is balancing the flow, people will stop ‘getting help’.

Last week, administrators of the MMM South Africa Facebook page told Moneyweb:“There are no promises or guarantees… MMM is just a platform and guarantees nothing”.