Reinstated Prasa board has 3 months to act. One of the first tasks for the reinstated Passenger Rail Agency of South Africa (Prasa) board would be to pay Collins Letsoalo several million rand in back pay.

This follows a ruling by the Pretoria High Court that Letsoalo, who was fired in February by the board from his position as acting group CEO for increasing his salary by 350%, was in fact entitled to the increased amount of R5.9 million.

The board’s firing of Letsoalo was seemingly the trigger that led to former transport minister Dipuo Peters’ decision early in March, to remove all but one member of the board four months before the end of its term. (Peters has since been removed from cabinet by President Jacob Zuma and replaced by Joe Maswanganyi.)

Judge Peter Mabuse nevertheless set aside Peters’ decision on the basis that it was irrational, unreasonable, disproportionate and procedurally unfair.

He ordered that the board be reinstated and the interim board Peters had appointed in the mean time, be removed. This interim board was to be led by former Sanral CEO Nazir Alli (pictured below). 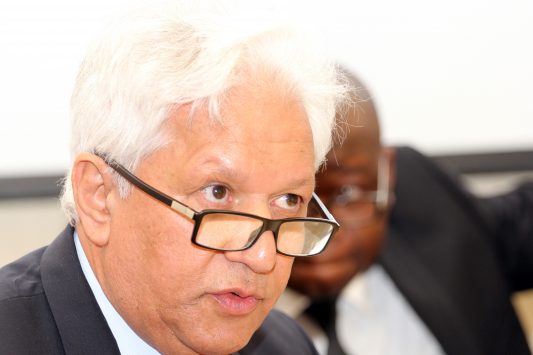 The court ruling would enable the reinstated board, led by Popo Molefe, to move forward with investigations relating to irregular expenditure of more than R14 billion at Prasa, including criminal charges and civil litigation to recover money that was lost to the organisation.

Molefe earlier told the court that the board had put the Hawks on terms for its failure to execute its mandate and investigate allegations of corruption at Prasa. He said the board would approach the court for assistance if need be.

In his judgement, Mabuse explained that Letsoalo was seconded to Prasa in July last year from the Department of Transport where he is CFO and deputy Director-General. He earns R1.35 million per annum in that position.

Mabuse referred to a letter signed by Molefe, in which Letsoalo was appointed to the position at Prasa and sets out his terms of service as follows:

“During the term of service as acting group CEO, Prasa will pay you at the annualised salary rate applicable to this position and in accordance with applicable remuneration policy, payable at such time at the company’s normal payroll during the 27th day of every month. You will be eligible to receive all the benefits applicable to the position and to Prasa’s Senior Officers. The details related to your compensation and benefits will be discussed and shared with you by the group executive responsible for the Human Capital Portfolio.”

Mabuse said it is clear that the remuneration package amounted to R5.9 million and that Letsoalo was entitled to that package. Molefe signed the letter and there was no mention of any further approvals that were required. He said the applicants did not explain to the court why this paragraph should be read differently.

He said: “It boggles one’s mind that the board seemed to have some difficulty with Letsoalo earning the same salary or the salary of the GCEO [Group CEO], the same amount that Mr Montana [former Prasa Group CEO Lucky Montana] earned per annum or put otherwise, the salary that a GCEO was entitled to. If 350% that the applicants complained about was the percentage that would have brought the level of Letsoalo’s salary to that of its GCEO and if it was agreed, there is no merit therefore, in the allegations that it was unilateral. It would appear that it was justified.

“It is not correct, in my view, that the increase was unlawful or that it had not been agreed by the parties in the appointment document. In my view, the perpetuation of the myth that Letsoalo wanted to increase his salary by 350% per annum is unfounded and unfair to him. The truth is that, based on the information before the court, Letsoalo was entitled to the same package that was agreed upon in his appointment package or the same package that was enjoyed by Lucky Montana.”

He said Peters should nevertheless have accepted the board’s decision to remove Letsoalo.

He said Peters should have considered the dire consequences of her decision for Prasa, the public and the individual directors. “They were at an advanced stage of managing the investigations into misconduct at Prasa and this could be derailed by the loss of their institutional knowledge.”

Peters further erred by failing to put what she considered the board’s failings to it, stating that she considers removing the board, and affording members an opportunity to respond.

He further found that she acted irrationally by cancelling Letsoalo’s secondment to Prasa, but at the same time removing the board for doing the same.

The Department of Transport was ordered to pay the applicant’s costs.