Marine phosphate mining gets Namibians hot under the collar

Marine phosphate mining is a potential income revenue stream for Namibians, but government and environmental groups are cautious. 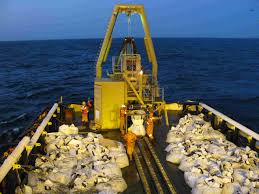 Namibian Marine Phosphate (NMP), a company that received a mining licence from mining ministry in 2008, recently had its environmental clearance revoked by the Minister of Fisheries and Marine Resources Bernhard Esau. NMP claims that it never received formal correspondence from authorities but learned through the media that the ministry cited environmental concerns and flouting of procedures.

NMP had intended to start the process of extracting phosphate through the Sandpiper Marine Phosphate Project located 60km offshore from Meob Bay and 120 km southwest of Walvis Bay by this year. According to the NMP, International Fertilizer Development Corporation (IFDC) confirmed that Namibian phosphate concentrate is suitable for use as direct application fertiliser (DAPR) and that the quality ranks within top three global producers of DAPR globally.

It further elaborated that the phosphate concentrate can also be used to produce a range of other fertilizer and animal products.

Phosphorous is also fundamental to agriculture, as it is commonly used in commercial farming. Mined rock phosphate and derived fertilisers support crop yields. Phosphorous reserves are only present in some regions of the world, while some established economies rely on imports of phosphate rock.

NMP has placed it on record that the scale of disturbance is significantly less than that caused by diamond mining dredging and bottom trawling on annual basis. The company said: “Production area is located in water depths greater than 200 metres and therefore does not lie within the prohibition zone designated for protection of fish spawning and recruitment.”

Namibian authorities, it seems, are not yet convinced.

Minister Esau recently instituted a moratorium and revoked environmental clearance given to NMP. Several media reports indicate lack of scientific knowledge and inadequate regulatory process not being complied with as the main factors contributing to the decision to halt phosphate mining. Another reason provided is lack of consultation before the mining operations resume.

“This is completely untrue. We [NMP] spent billions of dollars on a scientific peer-review process. Unlike diamond seabed mining, the phosphate extraction process involves no chemicals,” Knowledge Katti, majority owner of NMP, argues. He also shared video evidence of the consultation process where academics, NGOs and environmental commissioner held a consultative meeting.

“There are inconsistencies in how diamond seabed mining and phosphate mining are scrutinised. There is evidence that underwater diamond mining has killed Namibian indigenous fish species, yet this is not used as a criteria to revoke mining licence,” Katti explains.

Katti  is also baffled by how the decision taken in Windhoek disregards socioeconomic realities of Walvis Bay and Erongo region. Unemployment is visible in the Walvis Bay suburb of Keisebmond. Katti’s company has already earmarked N$60 million for a community trust fund which, among other social development imperatives, it plans to send locals to University of Namibia.

He is also skeptical of the involvement of fishing industry in opposing granting of the licence.

A local fisherman, sounding frustrated, questioned how the fishing industry as represented by Confederation of Namibian Fishing Associations (CNFA) can speak on their behalf of fishermen it never consulted.

Most of Keisebmond’s social ills can be directly attributed to the fishing industry, locals argue. The country has no empowerment legislation and fluid and lax labour laws. On a hot December Monday morning, several shantytowns had burned down. Fishing companies provides no housing to their employees.

A former mayor of Walvis Bay and currently a trade union leader concurs with this sentiment. “It is very suspect that a multimillion-dollar industry that has only built a stadium in the 70s is suddenly worried about sustainability of marine resources when they are currently depleted by diamond mining companies,” he pointed out.

He also lamented how the only black-owned fishing company went insolvent. He says the fishing industry remains largely untransformed and Knowledge Katti’s introduction of phosphate mining as a black man may be rattling a few capital cages locally and abroad.

NMP, regardless, remains optimistic that the company will be eventually be allowed to mine. Hannelie Scheepers, NMP operations manager, believes this will enable a value chain that will catalyse industrialisation of Walvis Bay harbor.

“The public has unfortunately been misinformed by faceless organisation hell bent on frustrating our progress. There has been fear created that once we start with operations fishermen will be out of work. This is simply not true,” Scheepers says.

She says the painful element of this smear campaign is that the misinformation has been targeted at the poor and unemployed, the same group likely to benefit.

On a positive note she speaks cordially of Walvis Bay City Council and Erongo Governor, who are both supportive of the project. She says that when operational phase kicks in after the initial construction phase of 24 months, fishermen will be used in phosphate miners, as techniques used in both industries are similar.

NMP has already expended N$780 million developing the Sandpiper project for exploration; environmental; technical and feasibility studies. Project development expenditure is estimated at N$5.2 billion in capital investment, making it one of the single largest investment projects in Namibia. N$728 million is estimated taxes and royalties to the national fiscus.

The value chain created by this project is also expected to generate significant opportunities for direct and indirect employment spinoffs for SMEs and other sectors of the economy. 450 Namibians will be employed in the first stage of the development. A further 160 be required on full-time basis to run the operations in Walvis Bay.