Foreigners continue to pull money from the JSE

This despite a surge in emerging market flows.

On June 1 foreigners were net sellers of R17.4 billion of South African equities. This was the single biggest day of foreign selling in the local market this year.

It was far greater than the R4.2 billion of outflows on March 31, the previous high. It even surpassed the total net outflows for March of R17.3 billion.

While this was an exceptional one-day event, it is part of a clear trend of foreign selling on the local market. Foreigners have been net sellers every month this year.

Net foreign selling on the JSE 2017 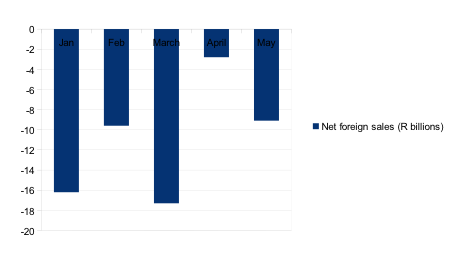 It is notable that April saw the lowest rate of foreign selling so far in 2017. This was the month directly after the cabinet reshuffle in which former finance minister Pravin Gordhan and his deputy Mcebisi Jonas were removed from office.

While this would hardly seem like an encouragement to investors, it was a period of rand weakness and that may have been seen by some foreign investors as an opportunity.

An indication of this is that foreigners were more likely to be net buyers on any given day in April than in any other month so far this year. In April, 41% of trading days saw net foreign buying, compared to 33% for the rest of the year to date.

To the end of last week, foreigners had been net sellers of a total R72.4 billion of JSE stocks in 2017. Of 105 trading days, only 35 had seen net foreign inflows. 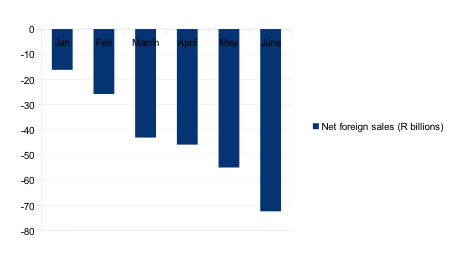 Last year also saw a very similar trend. Foreigners were net sellers of local equities every month in 2016, and pulled a total of more than R100 billion from the local market.

Last year one could have argued that this was part of a broader theme of investors shying away from emerging markets. According to EPFR Global there had been steady outflows from emerging market funds totalling more than $150 billion between the start of 2013 and the end of 2016.

This has however largely reversed. The Institute of International Finance (IIF) noted last week that May was the fourth straight month of net portfolio inflows of $20 billion or more from foreigners into emerging market debt and equity funds.

The IIF estimated that May saw foreigners putting a net total of $20.5 billion into emerging market funds, with about half of that going into equities. The bulk of this went into Asian markets.

While flows into African and Middle Eastern markets were generally flat in May, South African equities are clearly not keeping with this trend. Although foreigners have been significant net buyers of local bonds, they are not showing the same appetite for the JSE.