But increases in guaranteed pay remain subdued, according to the report.

The mining industry has been the bedrock for many a debate about the chasm between executive pay and what miners earn. As executives continue to drive cost-cutting measures, people are paying close attention to the compensation they receive during these austere times.

Other industries are beginning to see the same trend. The growing focus on executive pay is putting pressure on companies to be socially aware in the business conduct.

A PwC report released this month sheds light on executive remuneration in relation to the average employee, with a special focus on pay of JSE executives across sectors.

The median Total Guaranteed Package (TGP) for CEOs of large-cap basic resource companies is R23 million and the median TGP for executive directors is R16.3 million.

The basic resources sector, however, has been negatively affected by weak global demand for raw materials since 2008 and as a result there are modest increases in executives’ remuneration across this sector. See below. 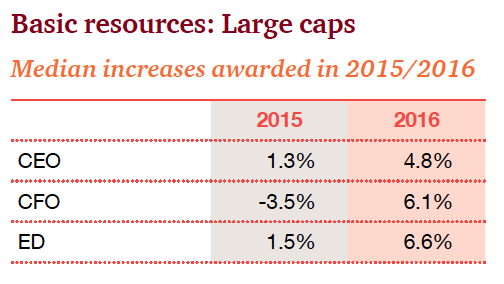 While South Africa’s executive directors were given increases of around 5.7%, junior workers received an average of 16%.

However, Deloitte’s Executive Compensation Report, which came out in June this year, found that the executive remuneration of CEOs for the top 100 JSE companies was about 500 times more than what ordinary employees earned.

Low economic growth has further weighed on financial services, who have turned to cost reduction and other areas beyond South Africa’s border for opportunities. These initiatives have had mixed results and the performance of executive directors is being observed by shareholders. 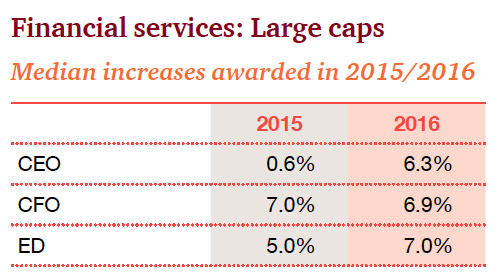 The argument around executive remuneration has resulted in a spike in shareholder activism, as investors seek more accountability about the value executives bring and how it’s measured.

In line with the King IV Report on Corporate Governance, the JSE has made it compulsory for listed companies to have remuneration policies in place.

For JSE companies, PwC’s report found that most shareholders voted against proposed remuneration structures due to “insufficient disclosure” and policy being “inconsistent with best practice”, among other reasons.

Say on pay – a rule in the US that allows shareholders to have a say in executive remuneration – is gaining momentum. Policy is shifting more towards shareholder satisfaction and companies are finding better ways to measure performance and how managers are compensated.

Long-term incentives are part of a reworking of remuneration that is being looked at. Instead of executives receiving large amounts in bonus payments, these payments are paid out over several years.

An aspect that some business in the UK are introducing into their remuneration disclosures is a breakdown of pay ratios. These would disclose how much the CEO and top executives earn relative to employees. Some companies are going as far as disclosing the gender pay ratio as well.

The report says more CEOs will in future be faced with the challenge of attracting and retaining brilliant minds. They should also be prepared to be “measured on their ability to navigate their companies through a rapidly-changing global technological environment”.