A retired education specialist has approached the Ombud for Banking Services on behalf of a financially ignorant employee, effectively alleging that Nedbank has engaged in reckless lending practices by not adequately explaining the implications of the credit granted.

Myrlene Pieterse from Port Elizabeth, a Nedbank client herself, has approached the Ombud after her complaints to the bank’s service department were not resolved to her satisfaction.

Pieterse became involved in the matter after realising that the employee – who cares for her 94-year old mother – was experiencing financial stress.

Upon closer inspection, it emerged that her employee had received a personal loan of R30 182 from Nedbank, (roughly 5.5 times her average monthly salary), at an interest rate of 35.4% per year and had to repay a total of R66 501.60 over a four-year period. She also received a Nedbank and American Express credit card from the bank. The personal loan was granted in April 2016 before the introduction of interest rate caps.

“On enquiring I discovered that she had hardly any money after all her deductions for the month had been made by Nedbank immediately after the salary is deposited. That was when I asked her to show me bank statements… This past weekend [April 2017] she actually phoned me in tears and requested some of her savings she keeps with me because she was starving,” Pieterse initially wrote to Nedbank’s client service department.

Pieterse says she repeatedly asked her employee whether the financial implications of the credit had been discussed with her, and she indicated that it wasn’t. Nedbank disputes this. With regard to the credit cards, her employee said she was told that she could use them if she needed to pay for something but didn’t have money available.

“When I asked as to who pays that back [the credit card installments], she was not aware that she has to do it – at interest!”

Pieterse is of the view that the transactions were conducted for financial gain and that no guidance or care for her employee was shown. She is also concerned about what she believes are lending practices that misled vulnerable individuals, which result in poor individuals spiraling into debt.

“This is blatant robbery from somebody who has nothing.”

In an e-mailed response to Pieterse’s query, an official from Nedbank’s complaints department referred her to the affordability assessment it conducted at the time, which showed that the employee had surplus funds available after her debt repayments, living expenses and loan installment were deducted (see below). 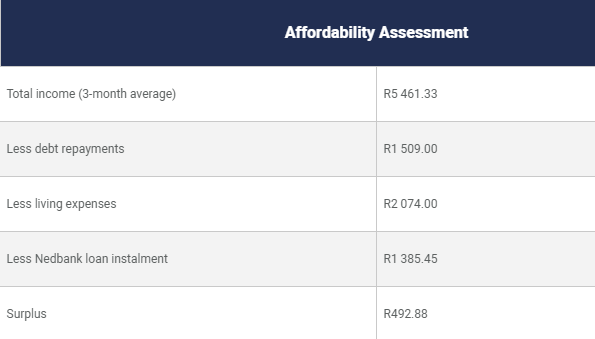 Pieterse disagrees. To be left with only R492.88 to live off per month is not acceptable, she argues.“Taking the above facts in to account it is evident that the client had a surplus amount after all expenses were taken care of, as such we believe that the loan was not granted recklessly as alleged.”

Nedbank also points to a Multichoice account for R319 previously listed on the employee’s credit bureau record, that it says she failed to disclose when she applied for the loan. The bank then refers Pieterse to the National Credit Act (NCA), which indemnifies credit providers from liability for reckless lending in cases where consumers did not truthfully disclose information.

But Pieterse says this account was closed when money got too tight, suggesting that her employee would not have seen the need to disclose it.

According to the NCA, a credit agreement would be considered “reckless lending” if the credit provider failed to do an affordability assessment, if it became clear that the client did not understand the risks of the credit, or if the debt pushed the client into a situation where she became over-indebted.

The aim of the NCA is to “promote and advance the social and economic welfare of South Africans, promote a fair, transparent, competitive, sustainable, responsible, efficient, effective and accessible credit market and industry, and to protect consumers”.

With regard to the credit cards, Nedbank said the employee’s ability to afford the first credit card was verified and confirmed, but it admitted that she should not have been granted a second card.

“We have looked at [the employee’s] second credit card application and, considering her income, her monthly expenses and listed debt at the bureaux, she should not have been granted the credit card.”

“To immediately resolve the matter, we will write off the second card and treat it as a paid-up account.”

In response to specific questions posed by Moneyweb, Nedbank said there were binding legal reasons that obliged it to refrain from disclosing sensitive client information.

“We therefore cannot respond on an individual client level. We can though confirm that we have been in discussions with the client and her employer and as far as our records tell us, we were under the impression that this matter had already been settled.”

Nedbank said its staff were trained to provide advice and guidance to clients and to ensure that the clients understood the implications and obligations of the credit product.

“If there are instances where there is a deviation from our standard procedures, we will address this with the client and reassess the client’s products, to ensure that the client has the correct and appropriate product offering.”

It said it was fully committed to promoting a fair and transparent credit market and would only lend money or give access to credit, to people who can afford to meet these obligations, based on a diligent credit assessment.

Pieterse is awaiting feedback from the adjudicator at the Ombud for Banking Services, Johan Brouwer, and has requested that the loan transaction be cancelled.