The company is accused of unlawfully paying R25m to the IDC, but as much as R500m may have been illegally siphoned out of the business. 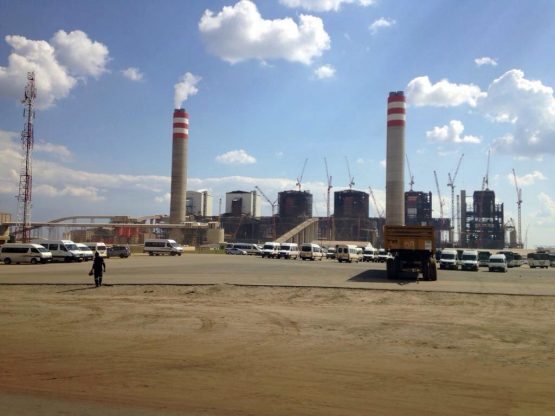 Tubular Technical Construction is still on site at Kusile Power Station, despite there being an application for the provisional liquidation of its main shareholder, September 2018. Picture: Moneyweb

The Directorate for Priority Crime Investigation confirms that it is investigating various complaints against directors of Katenge Tubular Construction who are alleged to have illegally paid R25 million to the Industrial Development Corporation (IDC) in settlement of a loan facility owed by an unrelated company within the Tubular group. This was done without the consent of its board or the knowledge of its 30% BEE partner.

The Tubular group has recently been shrouded in controversy over claims of bribery and corruption related to Eskom and other contracts.

In July, Moneyweb reported that BEE partners in a subsidiary of Tubular Holdings had applied for provisional liquidation of Tubular Technical Construction (TTC) for defaulting on settlement payments of R24 million. The application for provisional liquidation was brought by Revenue Management and Protection Solutions (RMPS), the 30% BEE partner in Katenge Tubular Construction. The balance of 70% is owned by TTC. Katenge was formed in 2009 as a BEE company to secure construction contracts under the Tubular umbrella, and succeeded in winning contracts from Exxaro, Murray & Roberts and the Kalagadi group.

The application for the liquidation of TTC, now before the Pretoria High Court, claims money that should have been paid out as dividends to shareholders was siphoned off to other companies in the Tubular group, or in settlement of liabilities that had nothing to do with Katenge.

The two directors in control of affairs at Katenge were Antonio (Tony) Trindade and Pieter Vorster. Mike Lomas was chairman of the Tubular Group.

In 2017 Moneyweb reported on allegations that TCP, another Tubular Company controlled by Trindade and Vorster, secured a large contract at Eskom’s Kusile Power Station in Mpumalanga, by paying bribes of R20 million – and possibly as high as R60 million – into the account of Hlakudi Translation and Interpretation CC, of which then Eskom contract manager France Hlakudi was the sole member.

In response to questions from Moneyweb whether TCP was still on site at Kusile Power Station in light of the application for its main shareholder TTC‘s provisional liquidation, Eskom replied in a statement that TCP is “performing work as per their contract obligations, which end on 10 December 2018. Eskom has noted with concern the allegations that have been raised relating to bribery and the matter has been handed over to the Special Investigations Unit (SIU) and a second criminal case has been opened.”

RMPS claims this money was illegally removed from Katenge’s bank accounts. An interim forensic report has indicated that as much as R500 million may have been illegally siphoned off from the company.

“We are yet to obtain a warning statement from the alleged suspects,” says Mulamu. “We cannot at this moment mention who the suspects are before they are arrested, charged, and appear in court.”

The R25 million was illegally paid to IDC by Katenge Construction in November 2012, but only discovered by the BEE partners in February 2013 when they requested company bank statements. On the same day the BEE partners enquired about dividends, they were told no funds were available for distribution. The BEE partners notified TTC of this irregular and unauthorised payment to the IDC and requested a refund.

These monies are still outstanding, say the BEE partners.