Consumers will feel the most budget pain – analysts

'Some taxes such as carbon tax and fuel levies will impact negatively on the consumer, who have to dig deeper into their pockets to live.' Leading economists say although the minister of finance’s 2019 budget is not a negative budget, it is likely to cause additional pain to consumers in the short term due to addition fuel levies and excise duties.

On the other hand, the Congress of South African Trade Unions (Cosatu) bemoaned that company tax and personal income tax for high-income earners was not increased.

Economist and econometrician from think-tank Econometrix, Sam Rolland, said the introduction of additional fuel levies and excise duties were income independent and would harm consumers across the earning spectrum.

Plus, these came at a time when consumers have been struggling with slow real wage growth. Any upticks in the price of petrol would also hurt consumption.

“By all accounts, the adjustments to the medium-term expenditure framework appear to be well intentioned. The choice of achieving savings in government expenditure through cutting of the compensation budgets is regarded as the fastest measure to relieve pressure on the fiscus.

“It also appears to be being done in a way that will not harm immediate household consumption significantly,” he said. 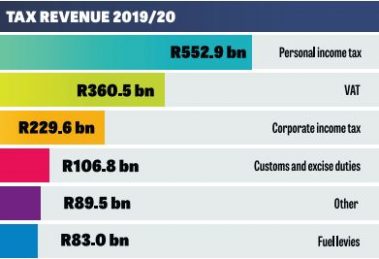 Regarding state-owned enterprises, Rolland said the steps to rectify the over-reliance on government guarantees were well intended.

“However, it is assumed this turnaround will take time, and any further deterioration in the operating environment of Eskom will have a knock-on effect on growth prospects, particularly around investment. This will ultimately harm tax revenue and place the debt-to-GDP ratio at risk,” he said.

He was optimistic about the forecast for economic recovery, which he expected to help with growth in tax revenue.

“It is up to the government in the post-election cycle to ensure that growth enhancing reforms, and particularly, resolving political uncertainty are achieved.”

A tax expert and partner at international law firm Hogan Lovells (SA) Inc, Natalie Napier, said that as the budget did not make big changes in corporate tax and individual tax and some individual rebates would be realised, it could not be classified as negative.

However, some taxes such as carbon tax and fuel levies would impact negatively on the consumer, who had to dig deeper into their pockets to live.

Other positives from the budget included environmental taxes, the introduction of single-use plastics and additional zero rating on white bread flour, cake flour and sanitary pads, all of which would help the consumer.

“But the consumers would have liked to see more items zero-rated,” Napier said.

The business tax rate has been increased to prevent business involved in tax structuring or shifting their profits to avoid tax.

“This is aimed at tightening the screws against tax abuse and to keeping it in line with the international standard and to attract investors to South Africa,” she said. “All in all, it’s not a negative budget for the taxpayer, but the question is what impact it is going to have on the economy?”

“It is also obvious there is no plan to wean people off social grants because this budget will not transform the economy and the low baseline wage regime that has kept many people dependent on government.

“There is nothing in the budget that provides for the possibility of changing the outcomes of our economic development trajectory,” Pamla said.

He added that the budget missed an opportunity to make key interventions that could address the revenue and expenditure crises, including increasing company tax from 28% to 30% and raising personal income tax for those earning above R1.5 million per annum.

“There is also a need to increase inheritance and estate duty taxes for the wealthy.”