Hot-to-the-touch, radioactive, treat-with-caution, readers of the report are cautioned 'not to place undue reliance on these forward-looking statements'. Steinhoff imploded in December 2017. Deloitte Accountants BV, which had been appointed as auditor of the group on May 30, 2016, was kept on as auditor – but 18 months later was still not able “to obtain sufficient appropriate audit evidence to provide a basis for an audit opinion on the consolidated and separate financial statements”.

To paraphrase, the 2017 and 2018 reports were prepared under exceptional circumstances, and management was required to make significant judgments. However, multiple uncertainties remain, and these can have a significant impact on the financial statements as a whole.

The annual report contains forward-looking statements based on management’s current views and assumptions. Factor in the unlimited multitude of risks and uncertainties … and it appears that no one will take responsibility for anything. Hot-to-the-touch, radioactive, treat-with-caution, readers of the report are cautioned “not to place undue reliance on these forward-looking statements”.

Deloitte, in issuing a disclaimer of audit opinion, cited the following problem areas:

The large write-downs were effected mainly in 2017. Impairment of goodwill, intangible assets, and property plant and equipment for the year amounted to €27 million (2017: €437 million), and impairment of financial assets (Brait/Fulcrum UK and Top Global) was €42 million (2017: €103 million). Goodwill and intangible assets constitute 38.5% of the total assets (2017: 41.4%). The risk is that these could be further impaired in the future. The forensic, advisory and restructuring fees came to €117 million (2017: nil).

Losses from discontinued operations amounted to €518 million (2017: €3.2 billion). Accumulated losses amounted to €9.8 billion (2017: loss of €8.5 billion), exacerbated by a further knock against equity simply referred to as “other reserves” of an amount of €1.0 billion (2017: €1.2 billion). The explanatory note 25 to the financial statements does not give a breakdown. Was the financial team pressed for time? Or is this simply a balancing figure? Go figure.

The group is in the process of restructuring its debt. Pepkor has now refinanced its group loans with facilities from various banks and financial institutions. The group envisages that its debt profile will change significantly after September 2018. The debt restructuring progress will be discussed in a future article.

Remuneration of the managing directors

The remuneration in itself is staggering. But the bonuses? 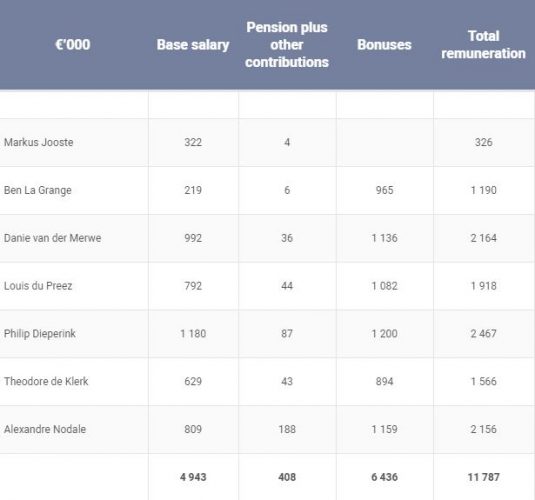 No clawbacks were made during the period. However, “the current management board and supervisory board confirm their respective commitment to make use of their clawback rights where appropriate”. And the appropriate trigger would be?

Steinhoff is registered in Amsterdam, and is tax resident in South Africa. The tax irregularities impact multiple jurisdictions. Tax uncertainties include tax adjustments that will have to be made because of accounting irregularities, ongoing transfer pricing investigations, and the tax consequences of the company voluntary arrangements (CVAs), in respect of SEAG and SFHG. The future tax consequences could impact the future tax liability, and the cash forecasts.

The South African Revenue Service (Sars) is not only in possession of the financial statements and the income tax return, it can call for additional information – and it has the benefit of exchange of information with many jurisdictions. Sars could perhaps play its part in unravelling any complex tax arrangements, even though the public wouldn’t be privy to this information.

The group is endeavouring to improve its cash position, and has instituted tight control over capital expenditure and the management of working capital. The divestment programme has also stepped up, with the sale of several investments, and more may be on the cards.

It is unlikely that further investments will be made in the foreseeable future. The group is defending numerous legal claims, briefly summarised and concerning mainly share exchange agreements and cancellation of subscription agreements “based on false and misleading representations”, further adding to the climate of uncertainty.

In releasing the long-awaited 2018 report, the group has surmounted its first hurdle. The six-month interim report will provide a better picture of any financial gains and the debt restructuring progress. Its struggles are not over.