Africa’s tallest building will have a deck offering 360 degree views of Joburg as one of its key tourist attractions. The 234-metre Leonardo skyscraper in Sandton is almost complete, and developers have even greater plans for the R3 billion mixed-use development and surrounding area.

Ambitious plans are being hatched for its opening and to entrench it as a major tourist attraction in SA and the continent. This follows Moneyweb breaking the news in January that The Leonardo will overtake the Carlton Centre in Joburg’s CBD as Africa’s tallest building (by about 10 metres).

While a large part of The Leonardo development led by The Legacy Group and backed by Nedbank will open in November, other key attractions such as a viewing deck and the ‘Sky Bar’ atop the building will be opened as part of future phases.

Executives at Legacy say most of the apartments as well as other facilities – including restaurants, a spa, pool deck, gym, office suites, conference facilities, a children’s creche and some retail outlets – will be open by November.

However, the six-star hotel with 140 rooms, the viewing deck and cocktail bar with 360-degree views of the city, and a piazza at the back of the building, will be completed and opened over time.

Moneyweb understands that the piazza plan is yet to be finalised and is a longer-term project, but the Legacy Group has secured the property at the back of The Leonardo – No 5 Protea Place, which currently houses offices and retail space – as a “defensive move”.

The Leonardo, which faces Maude Street and is a stone’s throw from the JSE, is also close to other Legacy Group developments such as Nelson Mandela Square and Michelangelo Tower.

Legacy Group chairman Bart Dorrestein was loath to comment on the piazza plans to Moneyweb on Friday, saying the focus was currently on completing the Leonardo building. He initially envisaged that the building would be completed in the first half of this year. Legacy Hotels & Resorts marketing director Robert Hodson says around 220 of the 240 apartments at The Leonardo have been sold. The building’s eight penthouses and iconic 3,000 square metre, three-floor Leonardo Suite have now been put on the market.

“Many of the buyers of the apartments are investors,” he says, adding that the apartments will go into a rental pool managed by Legacy Hotels & Resorts for short or long-stay accommodation, which is popular in Sandton as SA’s financial hub. “We are holding back on launching the actual hotel component, which is likely to open in 2021,” Hodson told Moneyweb.

He said prices have averaged around R65,000 per square metre at The Leonardo, with entry-level apartments sold at around R4.5 million. Penthouses average around R80,000/m², while the uber-luxurious Leonardo Suite is anticipated to fetch a cool R250 million. “Set over three floors and covering 3 000m², the Leonardo Suite will be the most sought-after penthouse suite in Africa,” he adds. “It offers 360-degree views of Sandton and Joburg. In fact, on a clear day you can see as far at the Voortrekker Monument in Pretoria and planes taking off at OR Tambo International Airport.”

The suite boasts a cinema room, 1,100m² of garden area, a rim-flow pool, four bedrooms and a dedicated lift that goes from the ground floor up to the 55th floor in 57 seconds.

If it does fetch R250 million, the Leonardo Suite is set to become the most expensive sectional title property sold in SA.

Legendary hotel magnate Sol Kerzner’s One&Only development at Cape Town’s V&A Waterfront, where a penthouse was sold for around R110 million in 2008, currently holds the title.

Coincidentally, Dorrestein worked with Kerzner on the development of Sun City in the 1970s and is today one of SA’s leading property developers in the hospitality industry. The Legacy Group is one of the biggest property owners in Sandton and operates hotels across Africa.

Dorrestein told Moneyweb he had identified a buyer for the Leonardo Suite, but could not mention who it was.

“Naturally, even when we sell the suite, I won’t be able to mention the buyer. However, it is not a done deal until the money is in the bank,” he says.

A ‘beacon of hope’

“The Leonardo is a labour of love for me and all the people involved. It stands as a beacon of hope for SA, coming to market in a really difficult time for the economy. It’s a major investment and is testament to our belief in SA’s future.”

Elaine Jack of the Sandton Central Management District said The Leonardo development was a strong sign of investor confidence in the area despite the tough economy.

“As SA’s financial capital, Sandton Central continues to attract investment and new real estate developments from businesses who want to be in the area,” she noted. “In fact, research from the South African Property Owners Association for the first quarter of 2019 shows that Sandton is home to most new development in SA. More than 26% of the country’s new office space is under development in Sandton.” 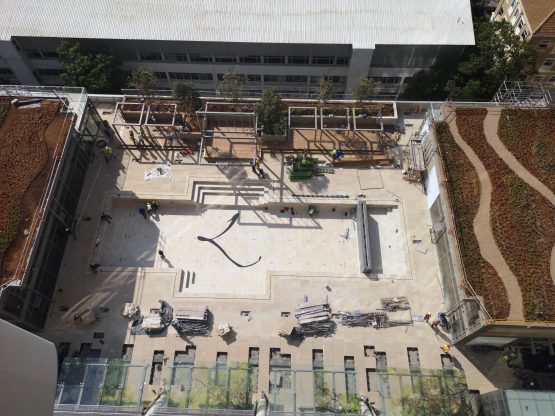