Taste Holdings loses its appetite in Starbucks and Domino’s

The decision to license Starbucks was always questionable, because the strategy of building out enormous stores in malls as destinations was flawed. Perhaps more surprising than Taste Holdings announcing the sale of its Starbucks master franchise rights for South Africa, together with its 13 stores, is the price – R7 million. This is little more than the average cost of fitting out one of its stores, and close to half of what it cost to build the launch store in Rosebank.

Make no mistake. This is a fire sale and all the food businesses must go.

The abrupt about-turn – deciding to exit food and focus on jewellery – was unexpected. Taste tried to offload the struggling NWJ and Arthur Kaplan ‘luxury retail’ operations little more than two years ago, but there weren’t any buyers.

And it doesn’t seem certain that the Sean Riskowitz entities, which together are the majority shareholder in Taste (with 66%), actually had much of a plan when they bought into and effectively bailed out this business last year. The spreadsheets may have indicated that there was lots of value here, but was there really?

The decision to license Starbucks was always questionable. Not because South Africa doesn’t have a ‘coffee’ culture, but because the strategy of building out enormous stores in malls as destinations was flawed. First, it required a boatload of capital. The eyewatering rent made getting the stores to profitability harder than it needed to be. And once they were built, keeping them busy turned out to be rather difficult.

Walk around any global city. There is a Starbucks on every second corner. These stores talk to convenience; they are not destinations in their own right.

Local rival, the cannily-named Seattle Coffee Company, figured this out. These stores are everywhere! A partnership with Caltex has helped, along with its clever approach to site selection (think office parks, schools, convenience centres). Vida e Caffè also clearly knows the game. And these Seattle and Vida stores are small. That’s the only way the economics makes sense.

Starbucks also suffered from the perception that its coffee is expensive, although the premium isn’t that significant when compared to rivals operating in the same segment.

The subscale business has been struggling. Last year, it generated R108 million in sales. The operating loss was R22.5 million. The problem is clear when one excludes new stores. The nine stores that had been trading for more than a year only generated R51 million in turnover – on average, that’s less than R6 million per store (or under R500 000 a month).

The problem is even bigger at Domino’s Pizza. System-wide sales for its 81 stores was R267 million, with an operating loss of R74 million. The store network is not profitable on an earnings before interest, taxes, depreciation, and amortisation (Ebitda) level. One wonders if it ever was.

During the difficult rollout of Domino’s, Taste has lost tons of franchisees. Getting their buy-in for the transition from the successful Scooters and St Elmo’s brands was hard. And as it became clear that Domino’s was struggling, Taste was forced to effectively buy up stores to prevent these from failing. At the end of February, it owned 58 of the 81 stores – seven in every 10.

The way in which Yum! rolled out Pizza Hut is instructive. It blanketed Johannesburg and only then started expanding out from there. Burger King followed the same approach, with a more measured store rollout in Cape Town. Only then did it shift focus to other regions. This meant concentrated, regional marketing spend and clear economies of scale on support and overheads (logistics, head office functions).

By comparison, the rollout of Domino’s and Starbucks displayed a stunning naivety, ‘helped’ along by an economy that simply isn’t growing.

As more emerges, the identities of those involved in the consortium that has bought Starbucks will be fascinating.

Taste’s (Riskowitz’s) plan required between 150 and 200 Starbucks outlets to get to positive free cash flow. This wasn’t anything we didn’t know before; the plan all along was to get to around 150 stores – a number not plucked out of thin air. These investors better have a few hundred million lying around.

Whoever is brave or mad enough to buy Domino’s is going to need to get this business to between 220 and 280 outlets. That’s three times its current footprint.

Taste says that, together, Domino’s and Starbucks will need at least R700 million – and even with that, positive free cash flow is seven to eight years away.

You can be certain that more cunning operators (like Famous Brands) looked at the Domino’s and Starbucks opportunities. There’s a reason they passed.

Taste is likely to find interest for its Fish & Chip Co – at least this business is at scale. Maxi’s, at just 29 stores, is however barely a business. And given current market conditions, there just aren’t too many buyers about.

What we’ve seen, then, is an expensive lesson in the misallocation of capital. Shareholders have ploughed in over R1 billion to fund the rollouts of Domino’s Pizza and Starbucks. At least current management and Riskowitz have figured out when to stop throwing good money after bad.

Bitter taste for some 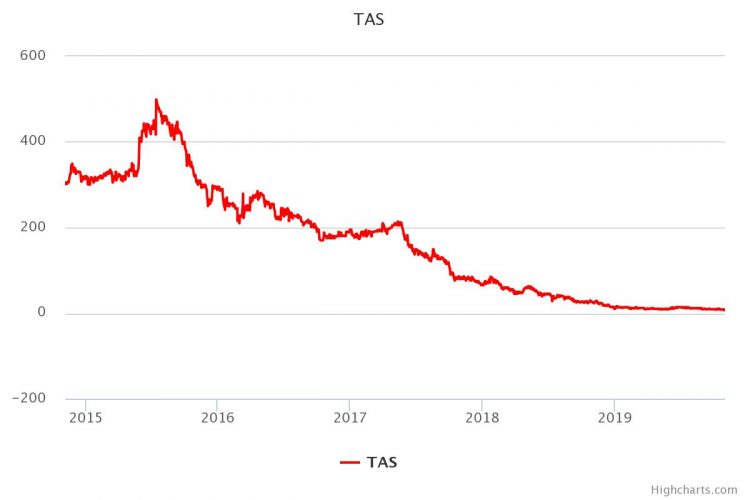