Exclusivity clauses in leases that allow the big four national supermarket chains to operate within shopping malls without competition must come to an end.

This is one of the findings made by the Competition Commission’s Grocery Market Inquiry, which looked into the general state of competition within the grocery retail sector, where the participation of small and independent retailers has steadily diminished over the years.

Shoprite, Pick n Pay, Spar and Woolworths have been given six months to voluntarily agree to comply with the inquiry’s framework for eliminating these leases – or face more stringent regulations.

Other recommendations made by the inquiry pertain to trade agreements with suppliers and rebates. It called for more transparency and equal treatment on trade terms and rebates, after finding that national supermarkets receive bigger rebates than small buyers and wholesalers without any “obvious rationale”. Additionally, the inquiry called for better regulations and government support for spaza shop owners who are also being pushed out by bigger players. 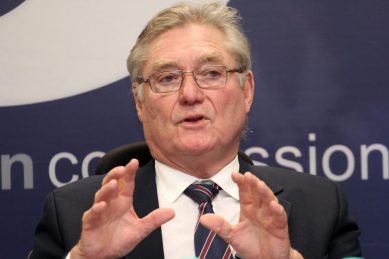 Big four: You can’t sit with us

In essence, the exclusivity and tenant mix clauses in long-term lease agreements between landlords and supermarkets create a barrier for emerging supermarkets, small retailers and speciality stores to gain access into shopping centres. This is because they restrict landlords from introducing competitors who trade in some of the products provided by anchor tenants, usually one of the big four supermarkets, including dictating where these competitors can be located and the size of their stores.

There are over 2,000 shopping malls and centres in South Africa, which account for half of all grocery sales across the country – and “well over 70% of these shopping centres are subject to exclusive lease agreements”.

Shoprite, Pick n Pay and Spar were the main culprits, with the majority of their leases containing long-term exclusivity provisions. While Woolworths’ leases did not contain “explicit” clauses that speak to exclusivity, they include clauses that have an impact on letting and usage.

Because financiers require property developers to secure national supermarkets as anchor tenants that will occupy the development during the typical loan repayment period of 10 years, the grocery chains “took advantage” of this requirement and bargained for exclusivity.

The explanation was that national grocery chains were taking a risk by locking themselves into these long-term leases without knowing if the centre or mall would be successful.

But the pattern persisted because, as leases expired, the anchor tenants would renew them, together with the exclusivity clauses – and “some of these contracts could endure for at least 30 years”.

The inquiry, headed by Professor Halton Cheadle, found that the agreements keep competition out and hinder emerging players – such as butchery chain OBC, Food Lover’s Market, Fruit and Veg City, and Choppies – from gaining traction in the shopping malls where the majority of consumers do their monthly or weekly shopping.

“These agreements not only hinder competition, but they also deny opportunities for SMMEs [small, medium and micro-sized enterprises] and historically disadvantaged entrepreneurs to participate in the economy, and they deny consumers the benefit of a broader product choice,” said Cheadle on Monday, as the inquiry tabled its 600-page report.

The inquiry has recommended that the enforcement of already-existing exclusive clauses should end “immediately” and that they be phased out within the next five years.

The commission’s chief economist James Hodge explained that the five-year period was selected because the bulk of the most offensive leases with exclusivity clauses fell within that timeframe.

Does this change anything?

The inquiry found that the industry’s approach to these clauses is already beginning to change, with support for the exclusivity leases starting to diminish and, in some instances, national supermarket chains beginning to waive the enforcement of these provisions.

Interestingly, the relaxation of these clauses has not necessarily resulted in greater competition from emerging challenger retailers such as OBC, Fruit and Veg City or Liquor City, which have little to no presence in shopping centres.

“This may be because they lack the negotiating power to force entry into larger malls in competition with the anchor tenant,” says the report. “Or a more deliberate strategy by the current dominant chains to keep such emerging challenger retailers [out] by denying them entry specifically.”

A little too late?

Investment analyst and market commentator Chris Gilmour said the recommendations would have “precious little impact” now, as the major supermarkets were already established – and, in a stagnant economy, where property developers have put further developments on ice, there is a limited chance for any significant retail space to open.

“I don’t think this is going to make much of an impact because, to put it crudely, the damage has already been done,” said Gilmour.

“It might have an impact if you assume that the economy is going to grow significantly over the next five years, and I am not confident that is going to happen.”

However, he said the inquiry was correct in a “very broad sense” in that emerging food retailers like Food Lover’s Market present a clear and present danger to the established chains, which would not exist if the status quo that prevents them from gaining a presence in the shopping centres persists.

“There is a move away from prepackaged to fresh food, particularly among millennials, and Food Lover’s is the epitome of that,” said Gilmour.

He added that where the competition authorities got it wrong was by only focusing on retailers and not food producers, which is “where the real inefficiencies lie”.

Companies like Libstar show a higher degree of entrepreneurship and innovation than Tiger Brands, which “churns out these well-known, boring brands with very little innovation,” said Gilmour.

“If they had to compete against their own internally produced private label brands, that, by definition, would make them very efficient,” he said. He explained that this would result in more competitive pricing for consumers as seen in the US and Europe, where private labels are prolific in grocery stores and trade at half the price of the national brand.