DionWired’s prices were not low enough and its marketing strategy not compelling enough to take market share from its competitors. Image: Supplied

It comes as no surprise that the South African unit of Walmart, Massmart, is in talks with unions to shut down its DionWired and Masscash stores.

DionWired is the group’s electronics and appliances subsidiary, while Masscash is its wholesale division and includes cash and carry, food and cosmetics outlets.

Its Massdiscounters division, the largest within the group with more than 160 stores, was the most affected. The giant retailer’s misfortunes extended to its Masscash division, with the latter recording a trading loss of R190.4 million (end-June 2019) across its African retail stores, from a loss of R4.1 million in 2018.

The retailer is now expected to cut up to 1 440 jobs. According to its website, it currently employs more than 48 500 permanent and flexitime staff across the group.

Evan Walker, a retail analyst at 36One Asset Management, says the retail industry is oversaturated. He predicts more retail closures in the next five years, adding: “I wouldn’t exclude anyone.”

The cash-and-carry market is also oversaturated, he says, as a lot of independent wholesalers have come into the market. He says the latter are, in most cases, better at adapting and understanding their consumers than the large traditional wholesalers.

“The independent wholesalers are opening up and surviving all the time, and they do not operate within the realms of the law like the listed wholesalers.

“You only need to drive around South Africa and you can notice that in the past five years, there are independent wholesalers in areas that are not supported by formal retailers,” Walker adds.

“They were a late entrant into the food market, and tried hard with Cambridge Foods,” he says. However, the retailer’s efforts were fruitless, as it made a first-time loss at Cambridge Foods last year “even though they are the most price-competitive chain in the country.”

Gilmour says he had expected the Jumbo, Rhino and Cambridge Foods chains to do well, as they target the lower end of the market.

“The reality is that people do not have money, and that has been a function of the economy for the past five to ten years – not that you can’t try and pull out tricks to try and take market share away from each other,” says Abraham.

Phumzile Siboza, brand and communication executive at Massmart, says it is evident that the group’s stores were not spared from the dire state of the economy, hence the possible downsizing announcement on Monday. “Retail performance has generally been constrained by the economy.”

She adds that 11 Masscash stores will be affected by the possible downsizing.

Siboza, however, emphasises that at this point no decisions have been taken regarding potential job losses and retrenchments.

“Our current focus is on ensuring a fair and rigorous consultation process, in which people are free to express their views and ideas about the potential closures.”

DionWired’s possible closure comes as no shock, says Gilmour; its prices were not low enough and its marketing strategy not compelling enough to take market share from its competitors.

He says DionWired has been a victim of deflation in the consumer tech industry.

“Technology has forced prices down so much that it requires inordinately high volume growth just to stand still….” The process is ongoing.

“Massmart needs to cut costs. And retrenching is the quickest, though the most painful, way,” adds Gilmour.

Massmart’s share price closed 5.8% higher on Monday, indicating that the market approves of the move to rationalise. 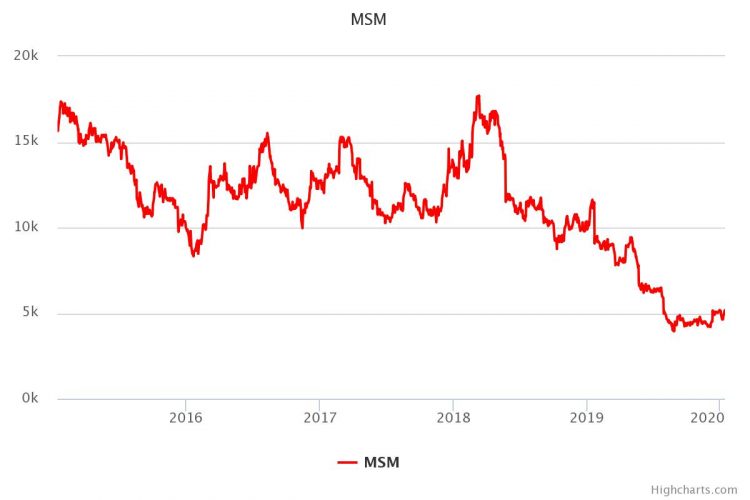