Pandemic taking its toll on the rich too

Economies around the world were largely closed for the period under discussion from beginning April to end June. Time out: sales at Swiss luxury giant Richemont, whose brands include German watchmaker A. Lange & Soehne, fell sharply in April and June as coronavirus lockdowns kept consumers away. AFP/File/Fabrice COFFRINI

It is dark times indeed if millionaires start holding back on buying a new Montblanc pen, a Piaget watch, a Van Cleef & Arpels necklace or a pair of Purdey shotguns.

Richemont – the second largest luxury goods group in the world and probably the most popular company on the JSE – just reported that sales in the first quarter of its financial year declined by 47% compared to the first quarter of the previous financial year. In essence, economies around the world were largely closed for the period under discussion from beginning April to end June.

The 47% drop in sales translates into lost revenue of more than €1.7 billion (nearly R33.2 billion at the current exchange rate).

Richemont reported “double-digit sales declines across all regions, distribution channels and business areas due to the widespread temporary store and distribution centre closures, a halt in tourism and subdued customer sentiment in many markets”.

‘Double-digit’ does not refer to numbers in the low teens, but dramatic declines in sales not seen ever.

This time around, it does not matter if one is looking at sales in constant exchange rates or actual exchange rates, by region, distribution channel or the specific luxury on offer, the damage is huge: a lot of the numbers show that sales fell by around 60%.

Online retail sales performed the best by falling only 22%, but sales to wholesalers fell by a massive 65%, which shows that retailers down the line are not optimistic about the future either.

Richemont chair Johann Rupert warned in the annual report in mid-May that the Covid-19 pandemic would have unprecedented effects, saying then that it was having a profound impact on the lives of millions around the globe.

“Millions have lost their jobs or have been put on government-supported schemes. Companies are facing unprecedented declines in their sales and some industries, such as airlines, will have to fundamentally restructure their businesses in the face of changes in demand; others will not be able to survive,” said Rupert at the time.

‘The best luxury goods are not transient’

Only a few months ago, he reassured shareholders that the “luxury goods industry is in a privileged position”, saying that the best luxury goods are not transient, but embody centuries of heritage and craft skills.

“Cartier was established in 1847 and has survived two world wars; Vacheron Constantin began manufacturing watches in its current premises in Geneva in 1755. Our maisons will survive these difficult times, supported by the strength of Richemont’s balance sheet,” said Rupert.

The trading update mentions that Richemont has total cash of €7.9 billion and net cash of €1.8 billion to see it through the difficult period.

Sales in Europe were 59% lower than in the same period last year with all markets affected by public health protection measures, subdued local demand in all markets, and a lack of international tourists who usually like to buy expensive upmarket luxuries.

Sales in the Americas and Japan declined even more with most of Latin America still in lockdown. Only China reported sales growth – a healthy 47%, mostly from online shopping and due to the fact that the Chinese economy was the first in the world to reopen. However, other economies in the area continued to suffer and the Asia Pacific region as a whole reported a decline in sales of nearly 30%.

It is interesting that online, although impacted by the pandemic, continues to grow in importance. Not only did online sales decline much less than overall sales, management points out that quarterly online retail sales exceeded wholesale sales during the last three months.

Online sales increased to 25% of total sales compared to 17% a year ago.

In his statement in the annual report published in May, Rupert referred to the coronavirus pandemic saying that we “must hope it is a once-in-a-lifetime event”. Shareholders must hope so too after seeing the latest sales figures.

Although Richemont reported that most of its own retail outlets and others reopened recently, shareholders are apparently not very optimistic. 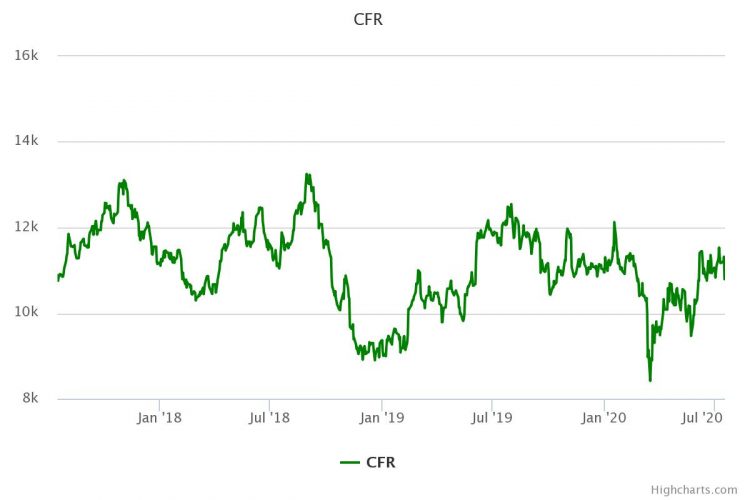