The Road Freight Association raised concerns over the introduction of operating licenses. 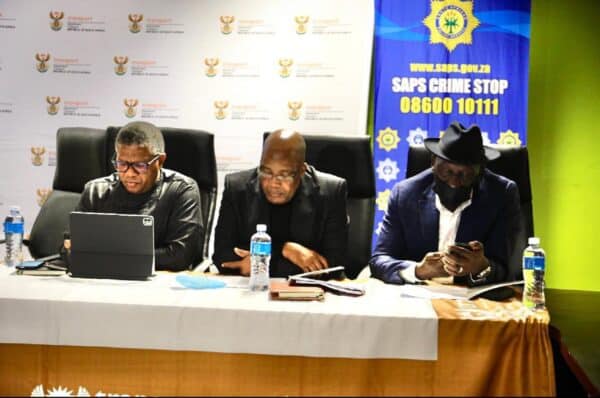 Government on Monday announced an 11-point plan to end the dispute by truck drivers in the freight and logistics industry over the employment of foreign nationals.

This followed last week’s blockade of the N3 by disgruntled truck drivers, who claim employers in the trucking industry are overlooking local truck drivers in favour of foreigners.

An Inter-Ministerial Committee (IMC) – comprising of the ministers of labour, transport, home affairs and police – presented the signed action plan during a media briefing in Pretoria.

Nxesi said the plan to end the dispute in the industry was unanimously agreed to by all stakeholders during a meeting held on Sunday, except for the Road Freight Association (RFA) which raised concerns over the introduction of operating licenses.

The minister said the IMC would continue to engage with the RFA on their concerns.

“We have agreed that further engagements will continue in this forum to come up with the solutions,” he said.

The implementation plan consisted of the following actions:

3.         Need for consideration of all foreign driving licenses;

11.       Consideration of the introduction of Operating Licenses for the industry.

The other stakeholders who signed the action plan included the All Truck Drivers Foundation (ATDF), Truckers Association of South Africa (TASA), and the Motor Transport Wokers Union (MTWU)

Nxesi said the claim by some operators in the industry that South Africa lacked skilled truck drivers was found to be false.

This followed inspections and law enforcement operations by the departments of employment and labour and home affairs, which reported that truck driving was an abundant skill in the country.

“The Department of Home Affairs reported they had conducted over 21 joint multi-disciplinary law enforcement operations and inspections to assess the extent of use of foreign and at times illegal truck drivers,” Nxesi said.

Home Affairs Minister Aaron Motsoaledi emphasised that the employment of illegal foreign nationals in the trucking industry was prohibited by law.

“When we do our operations on the road, we check whether a person is legal or not.

“And let’s make it very clear, it is illegal to hire an illegal person in the country and we don’t understand why employers should do that,” Motsoaledi said.

Government said 213 foreign truck drivers were arrested after being found to be in contravention of immigration laws. Nineteen of those arrested were in possession of fraudulent documentation.

Meanwhile, Transport Minister Fikile Mbalula said the 11-point plan would be monitored on a regular basis to ensure all stakeholders stuck to their commitments.

This included monthly report meetings to review progress on actions being implemented.

“It’s not going to be easy going forward on some of these issues. Where we don’t agree, we will still engage going forward,” Mbalula said.

“We’ve got timeframes that every month we will meet at this assembly to evaluate the implementation of the work plan.”