Following the cash on the JSE

The South African economy may be taking on water, but some JSE companies have an extraordinary ability to generate cash. It was recently reported that SA companies are sitting on a cash hoard of R522 billion, 11% more than a year ago. Also noteworthy is the fact that SA companies invested R80 billion abroad last year, and another R60 billion on a rolling, cumulative basis up to the second quarter of 2015.

This means that while companies are generating cash, they are either sitting on it or shipping it abroad. Shareholders will be eyeing this cash pile and pressuring management to return some of it in the form of dividends.

Moneyweb compiled the following list showing which companies have generated cash the fastest over the last five years. To make the list, companies also had to have shown an average growth in headline earnings per share of 20% over five years. The list therefore reflects those companies best able to grow cash and profits. Many of these companies are already richly priced, but could present buying opportunities if there is a pull-back in price over the coming months.

Several companies have been excluded from the list because they are thinly traded or their figures are skewed by one or two extraordinary cash windfalls.

Discovery has shown a remarkable ability to disrupt the established insurance market through product innovation, and results for the year to June 2015 show the group’s growth momentum is firmly on track with a 67% increase in headline earnings per share.

Cashbuild is another company that has done extraordinarily well with a near doubling in share price since the start of the year. Results for the year to June show a 34% increase in earnings to shareholders. It is well positioned in rural and urban areas, servicing the lower to middle income markets. But at a PE of close to 20 it looks well priced.

Finbond is another company disrupting the established order, offering credit and insurance solutions tailored around depositor and borrower requirements rather than institutionalised policies and practices. The share price has run from 12c to 400c since 2013 and at a PE of 40 investors are anticipating great things.

Ansys is an interesting company in the AltX market with some unique technologies such as train monitoring systems for Transnet, rope monitoring for mining and has now entered the telecommunications sector. Last year, with CEO Teddy Daka at the helm, it won a R120 million order to supply Transnet with its vehicle identification system that promises to improve operational efficiencies at the state-owned company. With a PE of 19, Dittberner says it is priced for growth, but still has room to improve.

Howden’s share price has come under pressure due to a 20% drop in mid-term earnings and shareholder unhappiness over management fees paid to its overseas parent. The company is sitting on a huge cash pile and counts Eskom as one of its biggest clients. At a PE of 7, there is potential for a recovery for those with patience.

Software group EOH has had an extraordinary run since 2013, with a more than four times increase in share price to R153. Most of this has come on the back of acquisitions, and at an eye-watering PE of 26 it will have to keep on making acquisitions to justify the valuation.

Datatec is another cash machine with operations in more than 70 countries and revenue of US$6.4 billion (R83.8 billion) for the last financial year. This is a great rand hedge and the fact that it provides services management shields it from the margin pressure typically associated with retailers of hardware. The share price has dropped from R77 to R60 in recent weeks after it put out a trading update warning shareholders of difficulties in getting its money out of Angola. At a PE of about 14, Dittberner believes the recent price drop may be an opportunity to acquire some shares.

Sabvest holds shares in Primedia, Autoquip and Log-Tek, as well as unlisted SA Bias, but its shares are too thinly traded to be of much interest to investors.

Bell Equipment has been hammered by mine closures and a slowing economy. The share price has fallen from R28 to R8 since 2013, though it recently put out a statement that earnings are expected to improve in the latest reporting period as a result of cost reductions and streamlining of operations. An interesting feature of Bell is that its net current assets, stripped of inventory, are worth more than its current market cap – what legendary investor Benjamin Graham refers to as a “net-net”. That will no doubt pique the interest of value investors.

PSG is a financial services phenomenon through its holding in Capitec (retail banking), PSG Konsult (wealth management) and Curro (private school education). But at a PE of 28 it is expensive, though shareholders have done well since 2013, with a four-fold increase in share price. There is still growth here, but the easy yards have already been covered.

Staying on the financial services theme, Peregrine has evolved a robust business model where roughly half its earnings are annuity-based, the dividend yield of 4.2% is attractive, and there is scope for further growth. With a three-fold increase in price since 2013, Dittberner says he values the stock at R40 on a two-year forward view.

FirstRand is the shining light in the banking and financial services sector with a price to net asset value of roughly three times, roughly double that of its major competitors.

As a cautionary note, Mr Price was hit by a trading update last month that warned investors of turbulence ahead. The share price fell from R28 to R20. This is what can happen when the market is expecting miracles and the buzz is killed with a negative trading update. The share is still trading at a frothy 22.

In these turbulent times, expect some bumps along the way, but keep your eye on the cash machines that litter the JSE. 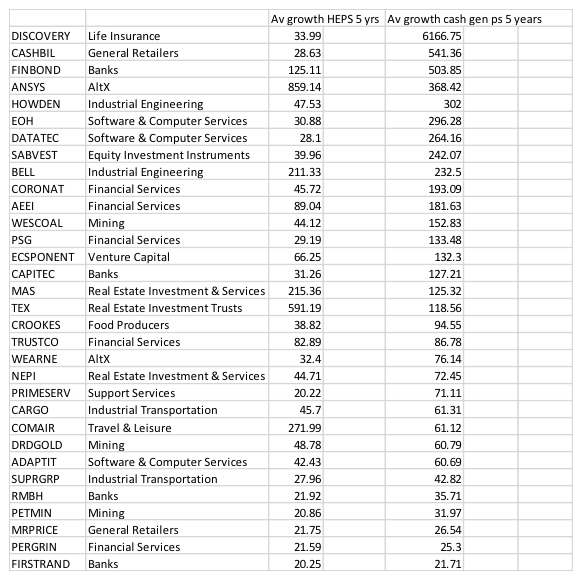