GEORGE – Airports Company South Africa (Acsa) aims to complete solar plants at all six its regional airports at an estimated total cost of R90 million by June next year.

Minister of Transport, Dipuo Peters, officially opened the R16 million, 3 000 panel solar plant at its George Airport – the first one to be completed – in the Western Cape on Friday. Situated next to the airport on an area of 1.2 hectares, the plant can generate close to 50% of the airport’s roughly 250 000 kWh average consumption per month at peak capacity.

Andre Vermeulen, group executive for airports at Acsa, says the installations at the Kimberley and Upington airports are underway.

“We hope to have some of them done by 1 April this year.”

The remaining three regional airports – Bram Fischer in Bloemfontein, Port Elizabeth and East London – will probably take another 11 months to complete. Acsa will finance the plants as part of its normal capital expenditure program.

Skhumbuzo Macozoma, chairperson of the Acsa board, says the company will introduce an energy mix into all its airports in line with its long-term vision to achieve carbon neutrality in energy consumption and run Green Airports in order to attain a Green Building Council of South Africa 6-star rating.

With regard to its three international airports – OR Tambo in Johannesburg, Cape Town and King Shaka in Durban – Vermeulen says the first step is to identify the land required.

These three airports are expected to grow substantially in the next ten to 20 years and consume quite a bit of electricity.

He says OR Tambo currently consumes close to 20 MW at peak. To provide a plant that can provide half of that will take up quite a bit of space.

“We have identified for example at OR Tambo space where we can put down 5 MW.”

Acsa will first finish projects at some of the smaller airports and apply the lessons learned to its international airport projects.

While people often jokingly refer to George as “cold and wet” due to its CAW registration numbers, the plant managed to achieved its production targets in two of the three months since it was switched on in September last year.

“We opted to do George first in the Acsa system because if we can make a viable business case for it here then just imagine what the business case would be in a place like Kimberley, Upington or Bloemfontein Bram Fischer Airport where we have more days of sunlight during the year,” Vermeulen says.

The George solar plant has a connection with the municipality and any additional power supply feeds automatically back into the grid, he adds.

On a clear sunny day there are stages where the plant produces more power than the airport consumes and the excess capacity will be pushed back into the grid.

The steep increase in the cost of electricity is also a driver for its decisions around how and when it installs solar farms. Vermeulen believes it will soon be cheaper to get power from solar panels than from the grid.

But even if there is no cost saving and the plant just breaks even the business case remains solid as solar is a cleaner form of energy, he says.

“At George we said that our aim is to break even over the period of 20 years but at Kimberley and Upington we actually think that there will be a payback period of less than 20 years, probably between 15 and 18 years.”

The solar plant at George Airport will reduce South Africa’s emissions footprint as well as pressure on the national grid. It also highlights Africa’s prominence in the global energy revolution, minister Peters said.

WATCH: Parts of Garden Route under water after severe floods
5 days ago
5 days ago 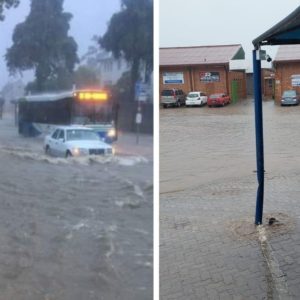 Flooding in pictures: George under water, residents urged to stay home
5 days ago
5 days ago

WATCH: Parts of Garden Route under water after severe floods
5 days ago
5 days ago

Flooding in pictures: George under water, residents urged to stay home
5 days ago
5 days ago