Rand could plunge to 20 to the dollar if Gordhan goes – economist. 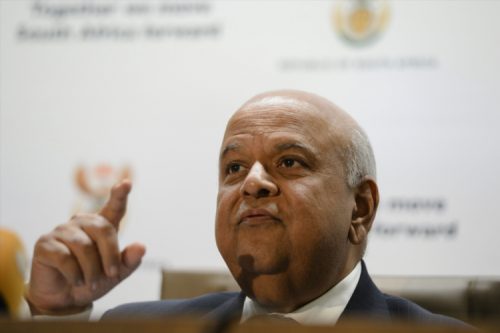 South African Finance Minister Pravin Gordhan is caught in a bind: his boss, President Jacob Zuma, and the nation’s tax commissioner are undermining his authority, yet he risks sending the economy into free fall if he resigns.

“The pressure is on him to fight it out,” said Daniel Silke, the director of Cape Town-based Political Futures Consultancy. “If the position becomes that untenable or he is intimidated to the point where he simply wishes to throw in the towel, it’s obviously his prerogative to do so. He would then witness what could be a disastrous market reaction.”

Investor confidence in South Africa hasn’t recovered since Zuma decided in December to install little-known lawmaker David van Rooyen as finance minister. Four days later, after business leaders and ruling African National Congress officials complained and the rand and the nation’s bonds slumped, Zuma re-appointed Gordhan, 66, to the post he held between 2009 and 2014. He’s since refused to intervene in a police probe implicating Gordhan and spurned the minister’s demand to fire Tom Moyane, the head of the tax office, for defying a directive to halt a management overhaul.

South Africa’s currency fell on February 26 by the most against the dollar on a closing basis since 2011, following reports Gordhan had threatened to resign if Moyane isn’t dismissed and the minister later warned of a campaign to undermine him. The political upheaval comes at a time when South Africa’s credit rating risks falling into junk status and the economy is forecast to grow at the slowest pace since a 2009 recession.

The rand could quickly breach 18 to the dollar and may plunge to as weak as 20, while a downgrade would become more likely if Gordhan goes, according to Kevin Lings, an economist at Stanlib Asset Management.

“It would be catastrophic in terms of investor perception,” Lings said by phone from Johannesburg. “The reaction would depend to some extent on what the circumstances were and who you replaced him with. Pravin does instill confidence domestically and internationally in South Africa’s fiscal management.”

Zuma, 73, took office in May 2009, just weeks after prosecutors dropped graft charges against him, and has since been accused by the nation’s graft ombudsman of benefiting unfairly from a taxpayer-funded upgrade of his private home. The main opposition Democratic Alliance says Zuma sought to put Van Rooyen in charge of the National Treasury to further his own financial interests. Zuma denies the allegation.

Zuma’s family has been shown to be the beneficiary of state contracts. His son Duduzane secured almost half the shares of Tegeta Exploration & Resources just weeks before it bought Glencores Optimum coal complex in South Africa in December, share register documents show. Optimum supplies the state power company and holds the right to almost a 10th of the export capacity of Africa’s biggest coal port.

“There’s a concern among investors that there is high-level interference or threats of interference into state finances,” said Dave Mohr, who helps oversee R110 billion ($7 billion) as chief investment strategist at Cape Town-based Old Mutual Multi-Managers. “Everybody is on the edge. The fact that the Treasury was always seen as independent contributed to investor confidence, domestically and internationally.”

Gordhan, who said any attempt to take over the Treasury must be resisted, is sitting tight for now.

“I have a piece of work to do,” he said in Johannesburg last week. “The remarkable thing about the ANC, somewhere in its genes, it’s able to find the right answers at the right time.”

While both Zuma and the ANC have publicly pledged support for Gordhan, that didn’t stop Police Minister Nkosinathi Nhleko from defending a decision by investigators to submit a list of questions to Gordhan to find out what he knew about a “rogue unit” within the tax agency that allegedly spied on political leaders, including Zuma. Moyane brought the complaint to the police last year, Nhleko said.

Gordhan, who headed the tax agency from 1999 to 2009, said the unit was legitimate. Zuma said the investigation should run its course.

“President Zuma is dealing with the matter of the South African Revenue Service Commissioner and the Minister of Finance through the correct channels using correct legal prescripts,” the Cabinet said in a statement. “The president is putting measures in place to address the issues responsibly and amicably for the benefit of all.”

The police probe must have been started with Zuma’s approval, said Ian Cruickshanks, chief economist of the South African Institute of Race Relations.

“It’s very difficult to make out why Zuma agreed to Gordhan’s appointment when he now says he is not sure whether he wants him to be there,” he said, referring to his refusal to agree to Gordhan’s demand Moyane be dismissed. “A lot hangs on Gordhan remaining in his post. If he resigns we will have another bloody day on the forex and bond market.”