MTN’s losing, Vodacom’s doing ok and Cell C is winning. Right? Not quite…

Popular (mis-)conception has it that Cell C, whose resurgence began under Alan Knott-Craig in 2012 and continues under Jose Dos Santos, has been rapidly stealing market share from larger rivals Vodacom and MTN (particularly the latter).

But an analysis of subscriber data published by mobile operators over the past five years shows that the country’s third-largest network did make inroads in 2013 and 2014, but as at June 2016, it is barely one percentage point better off than it was in mid-2011.

There exists, of course, the curious situation where Cell C’s disclosed subscriber data differs by nearly 100% from those detailed in a transaction circular published by soon-to-be major shareholder Blue Label Telecoms.

In the announcement of the final terms of Cell C’s recapitalisation published on 5 October, Blue Label stated that the operator’s subscriber base had increased “from approximately 9 million subscribers in 2012 to in excess of 25 million subscribers to date”. Indeed, a year ago Cell C reported that it had a base of 22 million (this was echoed in the cautionary announcement published by Blue Label in December 2015).

However, in the detailed circular to Blue Label shareholders published on 18 October, it cites a “total active mobile subscriber base of 12.6 million” as at 30 June. This is comprised of 10.6 million prepaid, 0.5 million postpaid, 1 million hybrid and 0.7 million broadband customers. (There’s an additional 1 million wholesale customers – primarily mobile virtual network operators, such as FNB Connect and Virgin Mobile – but these aren’t Cell C’s customers.)

Cell C “explained” to TechCentral on Tuesday that the 12.6 million number refers to subscribers who have been active within the last 90 days. This is the standard industry metric. The “total subscriber” number, it argues, is any subscriber who has been active in the last 120 days and it has used this “to report customer numbers both locally and as a management metric”.

Stunningly, this means that there is a base of over 12 million Cell C SIM cards churning away on a rolling basis, every 30 days. This in itself is no surprise as there are millions of customers in South Africa who churn through multiple SIM cards and who use these interchangeably, depending on which promotions are running when and for what service (free on-network voice calls on weekends, or 10 free SMSs per day, for example).

Importantly, this detailed subscriber data shows that Cell C has hardly chipped away at the market share of its larger rivals over the past five years. All data below is for active subscribers only, based on the industry standard of being active at any point during the past 90 days.

* Cell C did not share active subscriber data during 2015, only total subscriber numbers. Midpoint between 2014 and 2016 used.
** Telkom data is to end-March, data for other operators to end-June.

The popular ‘myth’ is that MTN has lost a boatload of subscribers to Cell C in recent years. Cell C didn’t disclose any active subscriber data during last year (presumably because of the recapitalisation exercise), and for this analysis, a midpoint between the figures for 2014 and 2016 has been used. Where Cell C did make inroads – and where MTN did lose ground – was in 2013, peaking in mid-2014. MTN South Africa endured two torrid years, with as many chief executives (Zunaid Bulbulia and Ahmad Farouk) between May 2013 and July 2015.

MTN was distracted for multiple reasons in those years, and the results have been plain to see. But, it’s regained much of that lost ground. Vodacom’s fall between 2012 and 2013 was due to the deliberate disconnection of dormant/lower-end subscribers. Its subscriber market share has adjusted downwards to the mid-40s, but it has done very well to keep its (very lucrative) contract and the most-profitable (upper) segment of its prepaid customers. 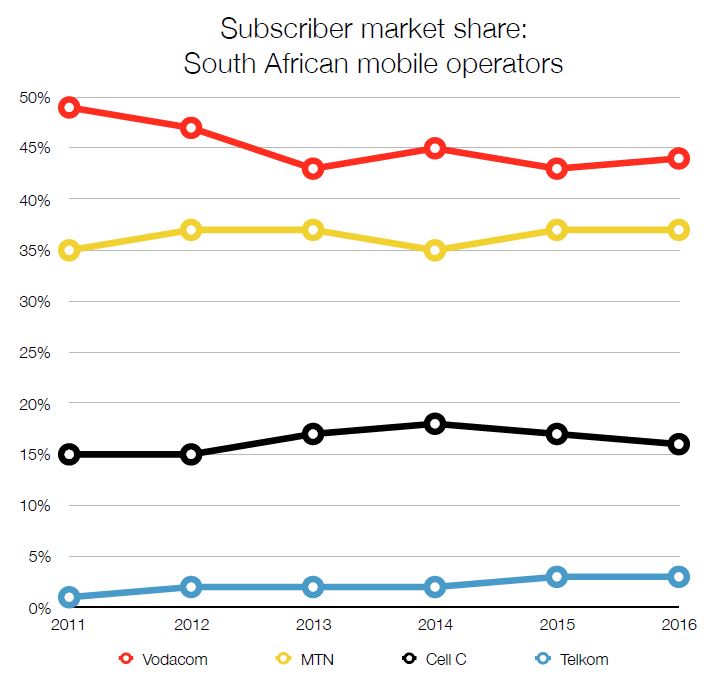 The market share disclosed by Blue Label in its circular (16%) squares perfectly with the calculations based on the 12.6 million figure and active subscriber numbers from the three other networks.

If Cell C’s “total subscriber” metric was used, those 25 million SIMs would give it 27% market share (and it would be nipping at MTN’s heels). But this is an apples to oranges comparison! That ‘27%’ means that Cell C will have achieved its previously stated goal to become sustainable, that is reach market share of 25%. It patently hasn’t and while there has been some improvement in the business, its only just managed to grow market share over the past five years (from 15% to 16%).

Investors would do well to be cautious of the divergence between that 12.6 million core number (which is the correct one to be focusing on) and the more hyped 25 million cited more broadly in the market. It’s not the discrepancy per se that’s worrying, rather that there’s this seemingly enormous base of SIM cards constantly churning away every month, particularly at the lower-end of the subscriber base. Maybe this is what spooked Telkom, causing it to call off its due diligence in November (aside from the mountain of debt). Quite why management is happy to use this stretched ‘total subscriber’ number as a metric is another question altogether…