Like its competitors, TFG will fight the credit regulator’s allegation.

Club fees are a big business for The Foschini Group (TFG). If it is found to be on the wrong side of the National Credit Act in charging account holders club fees on credit agreements, it could wipe out the more than R600 million a year income it generates.

The National Credit Regulator (NCR) has referred TFG to the Tribunal, who is yet to decide whether TFG contravened the credit act and impose a subsequent administrative fine and refund of fees.

The NCR’s department manager for investigations and enforcement Jacqueline Peters, said it has asked the Tribunal to order TFG to conduct an audit of its loan book to determine the number of consumers to be refunded. Peters said the refunds could date back to 2007.

“The NCR has a growing concern regarding the practice of certain retail credit providers of including club fees into their credit agreement,” said Peters.

In TFG’s case, it offers the subscription of fashion and lifestyle magazines for a monthly rate of R32 with a bundle of benefits including credit life insurance, death insurance, bursaries and competitions.

Although it’s unclear how many TFG’s credit consumers were subjected to paying a club fee, its recent results for the year-end March 31 2017, unveils the extent of the financial losses it might incur if found guilty by the Tribunal.

TFG amassed R400 million in publishing income (relating to its magazines offered) and insurance income of R289 million – equating to more than R600 million. The company doesn’t include a breakdown of revenue from club fees. See club fee revenue generated by other retailers below. 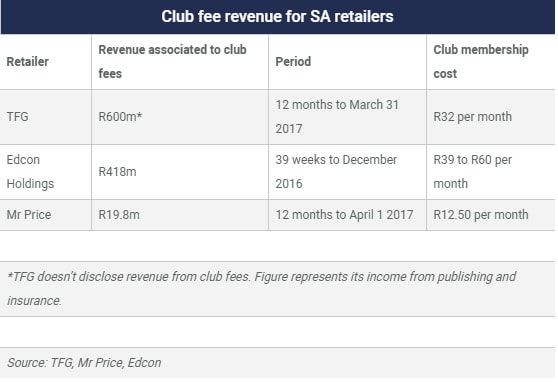 Peters said the NCR’s investigation, which was completed in December 2015, revealed that TFG allegedly charges club fees on store accounts (credit agreements), which is prohibited under the credit act.

The credit act, which has been in force for the last ten years, prohibits the charging of any other fees or costs in credit agreements under sections 90, 100, 101 and 102 – except initiation fees and interest on store accounts.

TFG will oppose its referral to the Tribunal, as it doesn’t agree with the view held by the regulator. It said that the credit act does not limit which products retailers may sell to its customers on their store accounts, and a subscription to club products is optional.

The retailer would likely cite the Tribunal’s recent judgement – which gave furniture retailer Lewis Stores the green light to charge club fees and extended warranties – to defend the merits of its club fees.

In the case of Lewis, two of the three Tribunal members ruled that because club membership fees and extended warranties fees were reflected by Lewis separately in the account statement of consumers, instead of it being included in the credit agreement, the retailer didn’t contravene the credit act.

Based on this case, market watchers believe that TFG might avert sanctions.

“Without knowing the details of the TFG case I would say based on the Lewis outcome I’m not too concerned [about the referral to the Tribunal],” said Anthony Rocchi, portfolio manager at Rexsolom Invest.

TFG is the third retailer to be accused by the credit regulator of charging unlawful club fees. Over the past two months, Mr Price was accused of breaching the credit act by charging club fees while the Tribunal ruled that the club fees charged by Edcon were illegal. Both retailers are opposing the NCR’s allegations.