The development of the product started after Morebodi Memphis Kaotsane won second place in the 2016 North West Innovation Competition.

A North West rural villager, who has invented a reflective paint for livestock that makes animals visible at night to motor vehicle drivers, has been selected for several awards, including the prestigious SAB Foundation Social Innovation Award.

The inventor, Morebodi Memphis Kaotsane who is from Pudimoe Village in the Taung area, also won a place in a North West Innovation Competition for his invention. 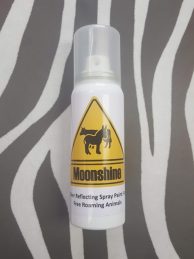 Moonshine reflective livestock spray paint that makes animals visible to motorists at night and invented by Morebodi Memphis Kaotsane from Pudimoe Village in the Taung area in North West, is up for an award in the prestigious SAB Foundation Social Innovation Awards. Picture: Supplied

“The innovative product, Moonshine, is a reflective paint for livestock that makes animals visible at night to motor vehicle drivers, thus avoiding accidents and protecting livestock and motorists alike.

“During the launch, members of the community received the product to use it to spray and thus protect their livestock,” Marx said.

The development of the product started after Kaotsane won second place in the 2016 North West Innovation Competition that was hosted by the Office of the Premier, NWDC, North West University and TIA (Technology Innovation Agency).

Since its conceptualisation, the NWU’s Technology Transfer and Innovation Support Office, in collaboration with the NWDC, has been assisting Kaotsane with the technical development of the product, which included ensuring that the spray is not harmful to livestock’s hides.

The launch of the product at the innovator’s community of origin near Taung was made possible by the Road Accident Fund (RAF). The RAF came out in support of Moonshine and have sponsored the first order of two thousand cans. Their vision is to roll-out the product to other provinces.

Kaotsane has also been selected as a 2019 finalist in the SAB (South African Breweries) Foundation’s Social Innovation Awards that provides a platform for innovators, social entrepreneurs, institutions and social enterprises to showcase their work in prototypes or early-stage businesses to solve social problems.

Videos on the finalists are being produced ahead of the winners’ announcement, scheduled for later this year.