The framework proposed by the governing party was intended to mobilise society around infrastructure-led recovery with new investments in a variety of sectors. 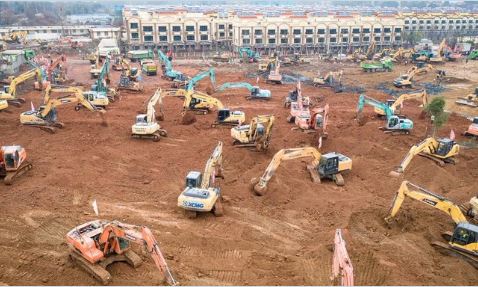 Picture for illustration purposes. China has started construction on a hospital in Wuhan, to be completed in 10 days, to deal with coronavirus patients, 24 January 2020. Picture: Twitter / @OfficialJoelF

As South Africa edges slowly towards what has been described as a deep recession, it seems the governing party and business are, to some extent, seeing eye-to-eye on proposed solutions to the country’s economic woes.

Chairperson of the ANC’s subcommittee on economic transformation (ETC), Enoch Godongwana, told journalists on Friday that the ETC had taken a glance at the proposed economic recovery plan by Business for South Africa (B4SA), which represents the majority of the country’s businesses partnering in their response to Covid-19.

Godongwana was speaking at the launch of the governing party’s own economic reform discussion document titled Reconstruction, Growth and Transformation: Building A New, Inclusive Economy.

“We are aware, we have seen it, we have not identified in detail areas of disagreement, checked areas of agreement.”

He said the framework proposed by the governing party was intended to mobilise society around infrastructure-led recovery with new investments in energy, water and sanitation, roads and bridges, human settlements, health and education, digital infrastructure and public transport.

“To achieve significant job creation multipliers, the emphasis will be on localisation, including maximising the use of South African materials and construction companies as well as labour-intensive methods,” said Godongwana.

The ANC’s document also called for decisive progress in reforming the telecommunications sector, which included hastening digital migration and spectrum in order to reduce data costs.

It also speaks of an integrated resource plan, which would see the expansion of industrialisation and the country’s productive sectors being accelerated through increased international trade, in particular, countries on the continent.

An idea, he admitted, was being impacted by demonstrations against non-South African truck drivers recently.

“The attack on foreign drivers is, in fact, taking us back in this regard, this is not facilitating that integration,” he said.

Godongwana, who described these as worrying, said there was a need to dig deeper to deal with the underlying cause.

“We have got to dig deep to see why, in certain circumstances, it’s normally South Africans attacking other Africans. What causes this? Manifestation of a greater problem,” he said.

When it came to health matters, he said an important point the ANC wanted to be considered was the continent’s approach to healthcare. He said the industry was worth R56 billion, but almost 60% of that was imports.