Many South Africans are already feeling the effects of climate change, which has negatively affected their lives and livelihoods, says the president. 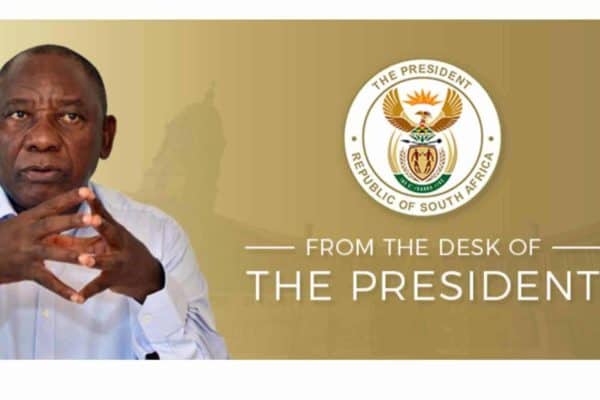 In his weekly letter to South Africa, President Cyril Ramaphosa emphasised that sub-Saharan Africa was bearing the brunt of a global climate crisis.

He said many South Africans were already feeling the effects of climate change, which has negatively affected their lives and livelihoods.

“Several communities in Mpumalanga, for example, are affected by high levels of pollution, which increases respiratory illness and other diseases.

“Those who are dependent on the ocean for a living have already seen depleted fish stocks amid changing weather patterns and changes in ocean temperature.”

With looming economic risks associated with the country’s continued reliance on coal, while it transitions to renewable, Ramaphosa said the need to act with urgency and ambition was key.

However, transitioning the economy must take into consideration “the needs of workers in these industries and in affected communities”.

It is no exaggeration to say that the world is facing a climate crisis of unprecedented proportions.

The latest report from the world’s leading climate scientists has warned that the pace of global warming is rapidly increasing, and Sub-Saharan Africa has been experiencing temperature increases well above the global average.

Many South Africans are already feeling the effects of climate change through drought and flooding, which have an effect on their livelihoods. Several communities in the Mpumalanga, for example, are affected by high levels of pollution, which increases respiratory illness and other diseases. Those who are dependent on the ocean for a living have already seen depleted fish stocks amid changing weather patterns and changes in ocean temperature.

There are broader economic risks. As our trading partners pursue the goal of net-zero carbon emissions, they are likely to increase restrictions on the import of goods produced using carbon-intensive energy. Because so much of our industry depends on coal-generated electricity, we are likely to find that the products we export to various countries face trade barriers and, in addition, consumers in those countries may be less willing to buy our products.

The other economic risk is that investors will shy away from investing in fossil fuel powered industries. Banks and financial institutions are already facing pressures from their shareholders not to finance enterprises that depend on fossil fuels to produce their products or services.

All these emerging trends mean that we need to act with urgency and ambition to reduce our greenhouse gas emissions and undertake a transition to a low-carbon economy. Many of our peer countries have already started migrating to low-carbon economic dispensations.

We however need a transition that is just because there are several important sectors of our economy that will be negatively affected by such a transition, including agriculture, tourism, mining, energy, transport, manufacturing and the biodiversity economy.

That is why a transition to a decarbonised economy must address the needs of workers in these industries and in affected communities. The process of transition needs to be based on the full involvement of organised labour and business in targeted programmes of reskilling and upskilling, creating employment and providing other forms of support to ensure workers are the major beneficiaries of our shift to a greener future.

As a country, we are developing detailed plans to enable a just transition. Our electricity sector, which contributes 41% of South Africa’s greenhouse gas emissions, will be the first phase of the transition. It will be the quickest industry to decarbonise and will have a beneficial impact across the economy.

We will be decommissioning and repurposing coal-fired power stations, and investing in new low-carbon generation capacity, such as renewables. We will also pursue ‘green’ industrialisation, such as manufacturing using green technology and a shift to the production of electric vehicles.

For while there are economic challenges and risks, there are huge economic opportunities that we must seize. South Africa is endowed with abundant resources that can be harnessed to open up new frontiers of investment and growth and build a new economy in areas like green hydrogen.

By pursuing these opportunities, we can ensure that our just transition yields new innovative opportunities that will create new jobs. We are working together with different partners across society in mining towns in Mpumalanga to assess the potential impact of a move away from coal, and ways to ensure that communities are protected against the risks and benefit from the opportunities presented by this transition.

Eskom will be undertaking a pilot project at its Komati power station, which is due to shut down its last coal-fired unit next year, to produce power through renewable energy. Komati will serve as a good example of how this shift from coal dependency could be achieved.

To signal our increased ambition, Cabinet recently approved our updated Nationally Determined Contribution (NDC), which sets out our emissions targets towards net-zero carbon emissions by 2050. This sets a target range for emissions, from restricting global warming to less than 2 degrees Celsius at the top of the range, with the bottom of the range compatible with the goal of restricting warming to less than 1.5 degrees Celsius.

Where we get to in this range depends on the support we get for our transition. Increased ambition cannot be achieved without the support from the more developed economies living up to the promises they have made in the past to provide financial support to developing economies. This needs to be in the form of grants, loans at concessional rates and private investment. The energy transition at Eskom and the development of green industries such as electric vehicles and green hydrogen will need to be underpinned by these forms of financial support.

This is not about charity. It is about fairness and mutual benefit. Countries with developed economies carry the greatest responsibility for climate change as they have historically been the biggest polluters, while developing economies are the worst affected. That is why wealthier countries have an obligation to provide significant financial support for developing economies to adapt to climate change and reduce emissions.

We are therefore engaging with our international development partners on a just transition financing facility to support our decarbonisation.

As the world prepares for the COP26 climate summit, there is a window of opportunity to mobilise additional climate finance.

The climate transition is something that affects every South African and we all need to be part of its design and implementation. We have undertaken widespread consultation and there is broad support among social partners for an ambitious, realistic and, most importantly, just transition. Our migration to a decarbonised economy is dependent on crafting a just transition that will not only meet our social obligations to our people but also enable our economy to move forward on a much higher trajectory.

We have to act now if we are to achieve sustainable and inclusive growth, secure the health and well-being of our people and safeguard the future of our planet.