The Chamber of Mines – in conjunction with Sibanye Gold – announced last week the company had reached a wage agreement with three of the four unions represented at its gold mines. 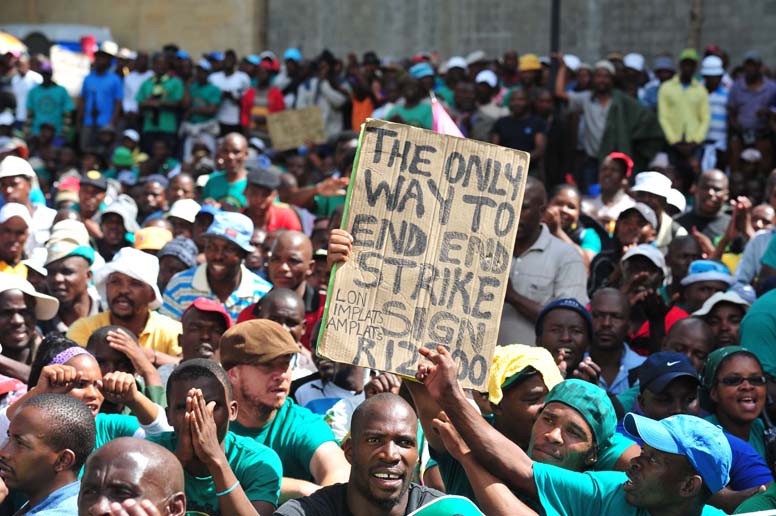 FILE PICTURE: Members of AMCU march to Implats head office in Illovo, 27 March 2014 to deliver their demands which include an salary increase to R12 500. Picture: Neil McCartney

The agreement relates to wage increases and benefits spanning a three-year period from the July 1 2015 to June 30 2018, and was concluded with the National Union of Mineworkers (NUM), UASA, and Solidarity. The Association of Mineworkers and Construction Union (AMCU) which has 42% representation at Sibanye’s gold mines, was not party to the agreement.

NUM is the largest union with 43% representation. But together with UASA and Solidarity, the combined total does not constitute a majority (50% plus one). Sibanye was hesitant to implement a wage agreement with the three (even though it was legally possible to do so) in the circumstance where one union with significant representation remained outside of it, and, in the interests of maintaining stability and harmony within its workplace and ensuring constructive relationships with all the unions in future. As such, it initially chose to not sign an agreement with the NUM, UASA, and Solidarity and instead chose to continue to engage with all of the unions.

So why did they decide to change course? “Our impression at the start of the extended engagement process under the auspices of the CCMA [which mediated the process when a stalemate had been reached in dealings with the Chamber of Mines], was that we would find common ground with all four unions,” says Sibanye spokesperson, James Wellsted. “But when it became clear that we wouldn’t be able to find a solution with AMCU, we took the decision to sign the agreement with the three unions – the NUM, UASA, and Solidarity, and implement the agreement at all of our operations. We didn’t feel that it was fair that the other unions and our AMCU employees, many of whom had indicated they wished to accept the offer, be held to ransom by AMCU leadership.”

This decision makes AMCU employees party to the agreement even though they have not officially consented by signing the agreement, and makes for an interesting set of possible outcomes.

According to Wellsted, the company does not feel a call for a strike from the AMCU leadership will currently be very popular with many of its members – despite the union saying they had received a mandate to call an industry wide strike following a meeting held on October 11. “The feedback we have had from many of our employees is that they don’t want to go on strike and they are happy to receive the increases,” says Wellsted.

While AMCU has a mandate to call an industry wide strike from its members, it has not served Sibanye with a strike notice. If any strike takes place, it will likely occur in the new year, once members have returned from the Christmas holidays. No further negotiations between the company and the union are taking place.

So AMCU has three options. It can call a strike in the new year, in the hope that it brings Sibanye back to the negotiating table. This could lead to a possibly toxic situation where members of NUM (who have agreed to work) face off against members of AMCU who are intent on striking.

It can challenge the blanket extension of the agreement to its members through the courts. Should the court agree, it would mean the company would have to recover wage increases from AMCU employees – a whole proposition in and of itself.

Or thirdly, it can reverse its own position and accept the wage offer.

Of the three, the last option is probably the most unlikely. NUM and AMCU are locked in a death grip where only one union will emerge intact. Our own impressions of AMCU leader Joseph Mathunjwa (read here) is that he will not back down until his demands for redress and a living wage are met. The dealings with Sibanye could well become the litmus test for this.