On November 24 1992 the British Queen, Elizabeth II, delivered a speech at the Guildhall in London to mark the 40th anniversary of her accession to the British Throne.

At this event she said the following: “1992 is not a year on which I shall look back at with undiluted pleasure. In the words of one of my more sympathetic correspondents, it has turned out to be an ‘Annus Horribilis’. I suspect that I am not alone in thinking it so. Indeed, I suspect that there are very few people or institutions unaffected by these last months of worldwide turmoil and uncertainty.”

She was, of course, referring to, among other things, the media frenzy surrounding the break-up of the marriage of her son Prince Charles and the late Princess Diana.

And so was resurrected an ancient Latin expression that has since become forever associated with someone or something having the worst of possible times.

For South Africa the year 2015 can rightly be called an Annus Horribilis. Or more colloquially put, we had a kak year…

Just when you thought things could not get worse for our country and people, it promptly did. You name it, we had it: political scandals, commodity prices crashing, rand sliding, credit rating downgrades, consumer and business conditions at 15-year lows, rising unemployment, electricity shortages, water rationing and drought together with the usual travails of surviving in South Africa.

And then, just as everyone was already packing the Venter-trailers and heading off towards who knows where, we had the by now infamous Nenegate, which truly rocked the country back onto its heels.

From being a bad but tolerable year for more than 11 months, on the evening of December 9, 2015 it turned into a truly, truly bad year.

For four days we had a glimpse of the raging fires of a financial inferno; a wildfire raging out of control. In two trading days the rand lost more than 10% of its value while the losses on the JSE was an estimated R180 billion as foreign investors fled. Repent or your country WILL burn, was the message from the markets to Zuma and the ruling political elite.

Had David van Rooyen not been replaced by Pravin Gordhan as finance minister, we would, I’m sure, have witnessed an almost total collapse of the SA financial operating system, which would ultimately have necessitated, among other things, a reintroduction of capital controls.

But why was the firing of Nhlanhla Nene the catalyst for such a violent reaction? It represented, in my opinion, the final straw of foreign investors’ increasing unhappiness and impatience with the poor returns on their investments in SA.

It is important to remember that foreigners now own up to 60% of the market capitalization of most JSE-listed companies and as much as 40-50% of our bond market. But their patience is running thin, especially if one considers that in US dollar returns, their investments have made no return since 2007.

For how long can these foreign investors, mostly institutional fund managers, justify their presence in a country where the leadership is seemingly hell-bent on its financial destruction?

Secondly, the timing of the firing of Nene came just days after Fitch as well as S&P lowered their respective country ratings for SA. In both instances they explicitly issued warnings to the ANC government NOT to tamper with the relatively prudent fiscal policies the country has been following. Tamper at your peril and the result could be a downgrade to junk status within six months, if not sooner, they said. A week later our esteemed president did exactly that.

Zuma’s decision to fire Nene and replace him with Van Rooyen was followed up almost immediately by a rambling off-the-cuff speech, which can only be described as someone perambulating on the outskirts of sanity.

To the foreign investors it signaled that a downgrade to junk status of SA is only a matter of time, and therefore the reflex to “panic first”, kicked in almost immediately.

I don’t think that local retail, and in some cases institutional, investors truly appreciate what the potential impact of a downgrade by the international credit agencies on our financial markets will be.

But if one looks at what happened to two countries downgraded last year – Brazil and Russia – both incidentally part of the artificial political construct called BRICS, then we are looking at a possible decline in the stock market of between 20 and 35% and a currency decline of anything between 15 to 30%.

There still is a reluctance to invest money offshore on the basis that offshore investments are risky and, secondly, on the misplaced view that the rand will somehow miraculously recover.

Right now an investment in SA shares, listed property, bonds and currencies must be considered a very risky investment with a high risk of a permanent loss of capital.

I had several discussions with fellow South African holidaymakers on Mauritius over the holiday on this issue. “The rand always recovers,” was an argument often raised against taking money offshore at these levels.

And while they might be right in the short term, I have to disagree strongly over the medium to long term. Currency markets, the largest financial markets of all, are very efficient and the price of any currency represents the purest distillation of all the possible information about a country, its policies and economic indicators.

As it is, the year 2015 was another torrid year for investors on the JSE. For the fifth year in a row – one the longest sustained periods of relative under-performance this century – the local equity market has performed extremely poorly, both in rand as well as US dollar terms. (See chart below.) This was a continuation of an under-performance that started at the beginning of 2011, when the rand was trading at R6.80 to the US dollar. 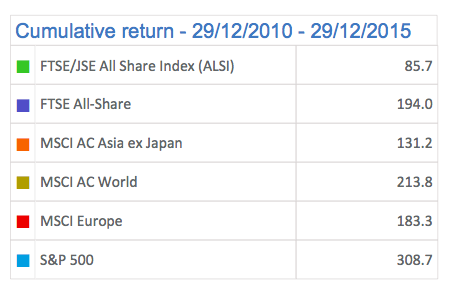 It is also a reflection of the collapse in the commodity cycle, which has smashed the price of resource-rich companies such as Anglo American, Glencore, BHP Billiton, Assore and many others. Like all countries suffering from the illusion that commodity cycles last forever, we have no defense against a world that wants less and less (and at a lower price) of the stuff we dig out of the ground.

Take particular note of the relative under-performance of the SA stock market versus the S&P 500. For every rand return you made in the local market you made R3 in the US market over the last five years. When you compare the JSE returns over the same period versus my favourite sectors such as biotechnology and health care stocks, the ratio is closer to 1 to 6.

Yet local investors seem to operate under the illusion that merely investing in the JSE offers all the protection they need and that they do no need to consider the offshore investing.

We live in a world where the US dollar is king. The cycle of interest rate increases in the US has just begun and by the time it ends, whether driven by economic events in the US or elsewhere (China), we could end up with a rand closer to R20 than R12 or even R10 to the USD.

Look out for next week’s article: an update on my favourite sectors for creating global wealth.

*Magnus Heystek is the investment strategist for Brenthurst Wealth. He can be reached for ideas and suggestions on magnus@heystek.co.za.