Do Taraji P. Henson and Terrence Howard party like Cookie and Lucious? Stay tuned for a report from the Empire party. 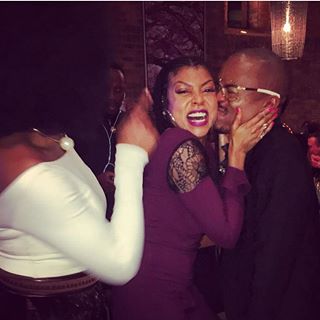 Empire stars Taraji P. Henson and Terrence Howard have been in South Africa for almost a week now, doing interviews and having nice dinners that some of us never got invites to. The TV couple have been invited to different radio stations for interviews, with the recent one being with radio darling Anele Mdoda, who said her interview with Henson was fun.

Sharing the experience on Instagram, Mdoda said: “Terrence actually requires more energy than Taraji. Taraji is fun and quirky, Terrence is intense and wants all of you. I elevated as a broadcaster yesterday,” further sharing thoughts about a conversation she had with Howard, in which she told him he was dressed like a schoolkid and his response was: “If I were a schoolkid, I would have a crush on this teacher (referring to Mdoda).”

The TV stars seem to be the fun and loud characters we saw on Empire in real life too. If Henson is exactly how Mdoda described her, imagine her being in a room with the ever-energetic Somizi Mhlongo?

Well, the two actually met, and it seemed as if they got along like a house on fire. Somizi took it upon himself to teach Henson to say “wooo shem”, his famous phrase. Before the end of the night, SomGaga had already told Unathi Mankayi he would “convert” for her.

These are just some of the encounters our local celebrities have shared on social media so far, showing us the fun and warm people the Lyons are – at least when you’re not trying to steal their Empire clients.

Tonight the stars will be painting Jozi red. The Lyons will be hitting up Rosebank nightclub Harem. After a week of media conferences and Q&As, the Hollywood stars will be letting their hair down in the City of Gold.

Could Somizi and Unathi be joining them tonight? Our Connect youth journalist Desiree Tan is joining the two and will give us a report on what went down tonight.