Orlando Jones back in SA

It's been four years since Jones graced SA's shores, but now he's back and looking for a house 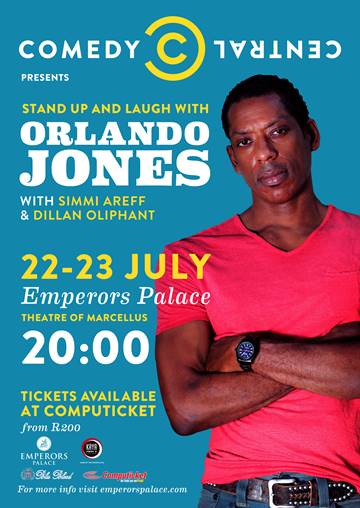 International Actor and Comedian Orlando Jones has made his comedic return to the grassy shores of South Africa with his one-man comedy show brought together by Comedy Central at Theatre of Marcellus, Emperors Palace, Johannesburg July 22 and 23.

It has been four years since Jones’s last appearance in South Africa, and the 48-year-old, father to a four-year-old daughter, made mention of possibly making South Africa one of his residences. What came as a surprise was the mentioning of young local hip hop rapper Nasty C, who seems to have made a fan of the International actor and comedian.

“I am looking for a house here, I want to do business here,” says Jones

At the press conference held at Emperors Palace on Tuesday, Jones expressed his excitement to finally let people see and meet the real Orlando Jones, as well as having local comedians Dillan Oliphant and Simmi Areff (who he met while shooting Madiba, a six-part US miniseries based on the life and times of Nelson Mandela, in which he stars as Oliver Tambo) open for him.

“I really wish to do a lot of things here, first of which is to start a school on the comedic infrastructure which comedians are complaining about.”

Jones referenced social media as a tool to mobilise an audience.

When harassed by a MoFaya rep to taste the energy drink, Jones took up the challenge with all the humour and generosity of a trouper.

He further touched on the importance of continuing the legacy of Mandela and, through the invitation of Blu Blood, he will be visiting the children of Orange Baby Orphanage and get the opportunity to meet Dali Tambo.

Comedy Central presents Stand Up and Laugh with Orlando Jones is brought to you by Blu Blood in association with Comedy Central (DStv channel 122) and Kaya FM & MoFaya.