The four started small in 2014 when they released their EP, Fox in a Hole. 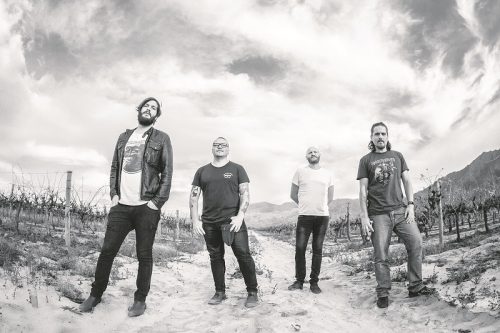 Music comes in many forms. While pop can easily be packaged with a delightful bow, the harder stuff takes some time to get used to. But Cape Town-based band Stoker seems to slowly be breaking down barriers with their blaringly different sound described as sinister dirty rock ’n roll featuring heavy distorted guitars, bass and pounding drums that drive each track on their debut album.

Heart pounding rhythms aside, the band consists of two sets of brothers hailing from two small towns. Chris and Jurgen “Borrie” Bornman are from Rawsonville and Morgan and Redge O’Kennedy are from Malmesbury. The four started small in 2014 when they released their EP, Fox in a Hole. They marketed it and themselves at a number of festivals, but it’s only this year with the release of their debut album where you can really see what Stoker is all about.

If you want a visual narrative of what Stoker is, check out the music video of their first single from the album Forever Drive. The black-and-white smoky imagery serves to underline the lyrics.

“The song’s plot deals with my inner dialogue, the arguments and statements going back and forth. The look of the video accentuates this, even though the melodies and vibe isn’t necessarily dark,” says Chris, Stoker’s lead vocalist and guitarist.

Drummer O’Kennedy gave some more insight into the band.

Explain ‘dirty rock’ and what you love about it?

Musically I guess it’s just a sound or a tone that we respond to. From our influences to the way we play and record, we prefer things to be not too polished.

You’ve received some praise for your album, but what you’re doing isn’t necessarily for the mainstream market. How do you approach marketing?

Most of the music we were into growing up was hard to get hold of due to it being an import. You’ll pay twice the price and wait 2-4 months for that album with a smile on your face. So to have our album ready and available online, be it through Deezer, iTunes or Google Play, is fantastic. The way we prefer to market ourselves is by playing live and meeting the people. Being online makes the world a whole lot smaller, so we get to play more shows.

I read somewhere you have a ‘sinister’ sound… what does that mean, and how do you feel about it?

I think it’s great. I think any artist appreciates being identifiable through their work. As for the sinister tag, that probably stems from what we’re influenced by as individuals. We prefer our rock ’n roll with a dose of wicked.

Lyrically where are you coming from, in terms of the album as a whole?

Chris has his own way there. He’ll focus on each song, rather than the album as a whole. He always surprises lyrically – hits you when you least expect it.

The album sounds and feels extremely professional – which means a lot of time (and money) went into it. Tell me about how you navigated production?

We wrote 12 brand new songs for the album in three months or so, then started pre-production with our engineer, Gerhard Grobler. We would haul up in the Bornman brothers’ childhood home in weekend-long sessions, and Gerhard would record our jams. As Chris wrestled with lyric ideas, the rest of us made “potjie” in the back. Once we were happy with what we had, Gerhard would masterfully track us at Valve House Studios in Cape Town. We recorded as much as possible live and then took our time with vocals and mixing. He went above and beyond to source the gear he deemed necessary, working without end straight through.

What SA bands and groups do you listen to?

We plan to get at least four or five more singles and music videos in tow, off this album in the next year or so – while playing any and everywhere!

There might also be some acoustic ventures on the horizon.

Stokers’ music is available online through iTunes and Google Play, but if you really want to get to know the changemakers their social media platforms are really the best way to get insight into the band and their brand of music.

Fokofpolisiekar: All grown up, but still rocking the tannies
3 weeks ago
3 weeks ago

Fokofpolisiekar: All grown up, but still rocking the tannies
3 weeks ago
3 weeks ago