Shaping a narrative at the Soweto Theatre

Warona Seane is the artistic director at the Soweto Theatre – an exciting and daunting position to be in. Warona Seane, seen here in Ukutshona Ko Mendi, balances her roles as actress and director with her duties as artistic director at the Soweto Theatre. Picture: Supplied.

“It’s exciting because I get the opportunity to showcase new and fantastic work that is coming out of Johannesburg and South Africa. But I also need to make sure that the space stays open and has lots of audience members coming in,” she says.

The Soweto Theatre, with its multi-coloured block structures, has become an architectural celebrity around the world but ultimately, it’s just a shell. What are the challenges in terms of making the theatre an authentic cultural and entertainment brand?

“You can cut and paste material from elsewhere, but that’s not the plan,” says Seane.

“Our major challenge is audience development; ensuring there’s a consistent flow of people coming in to watch shows – and in good numbers. We’ve recently had a production from [director] Princess Mhlongo – And The Girls In Their Sunday Dresses by Zakes Mda – beautifully reimagined and acted, with a whole lot of audience participation brought into the piece.

“Yet we really struggled with audiences for that show. I had thought that would be the kind of work that would speak to Sowetans. It’s about poverty and hunger and waiting for something better. It’s a learning curve, I guess.”

The capacities of the three performance spaces (Red, Blue and Yellow, respectively) at the Soweto Theatre are 436, 120 and 90, so different shows are scheduled for appropriate venues. What are the potential solutions to the audience issues; to getting bums in those seats?

“I think it becomes important for us to start going into Soweto and to say, ‘This is what we have’,” suggests Seane.

“We have trainees, and what we’re doing is trying to get site-specific perfomances going, linked thematically to whatever is going on in that area. It’s important for us to be very visible throughout Soweto, not just through posters and that sort of thing, but to have pieces of work that speak to the people there.”

That’s a very different idea to the usual mail drop or handing out of flyers. Further brand extention is possible through making the theatre a community gathering point; a place where Soweto residents can meet for a cup of coffee or plan their business meetings. 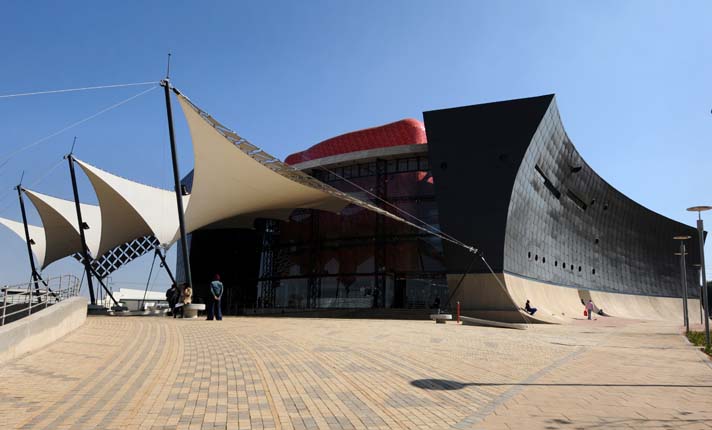 The outside view of the Soweto theatre 21 May 2012. Its first production “The Suitcase” will take to the new stage on the 25th of May 2012. on the day of the launche. Picture Nigel Sibanda

“We will soon have a coffee shop operating from the theatre – the Stages brand that’s at the other Joburg City theatres as well. And the amphitheatre outside is going to be renovated. At the moment, it’s not suitable for people to stage performances there, but it’s been a place people have been using to work out and so on. There’s still a separation between that older space and the theatre itself, which is still quite new.”

Is there a hint of suspicion about the theatre because of it’s stand-out design – feelings on the part of the Soweto population that it’s just “not us”?

“I’ve heard a lot of stories regarding what people think the space is about,” smiles Seane, “including that it’s the sort of theatre where people go to have surgery done! Artists have been a bit reticent as well, not knowing if they can just walk in or not. That’s why we have tours. If someone comes through, we’ll take them on a tour so that they understand that it’s their space, and that we’re just custodians for the meantime.”

As a high-profile actress and director, is Seane finding that she needs to put those other roles to one side to focus on her administrative duties?

“To some degree, yes,” admits Seane.

“You can’t be juggling so many balls at the same time, unless you’re a Cirque du Soleil performer…”

“Exactly! I am acting right now, but am holding back on directing for the moment. Happily, it’s in my job description that I have to direct. so it won’t be off the table for too long.”