Taking it to church in Clash Of The Choirs

Chuuch! As angels hover above the Victory Theatre in Houghton Estate, their spirits are channelled through the voices taking part in the second season of Mzansi Magic's Clash Of The Choirs. 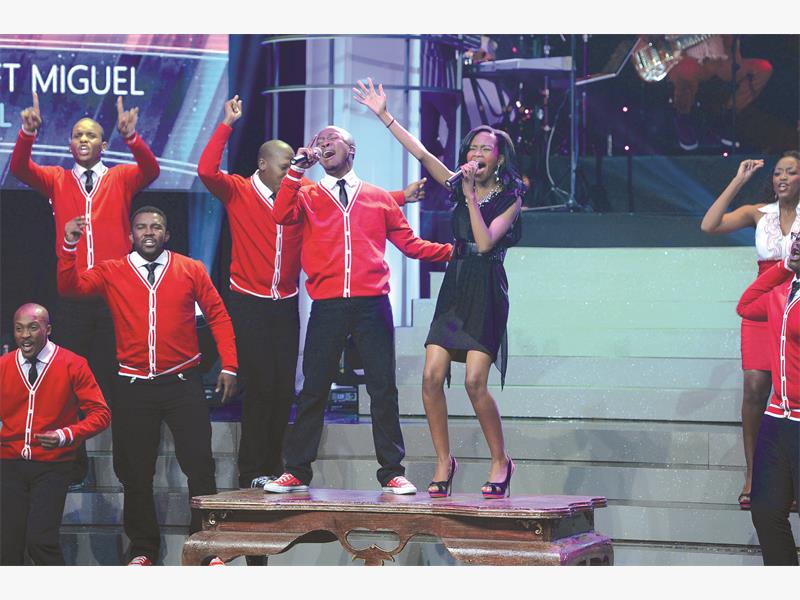 IN PERFECT HARMONY. The choirs pulled out all the stops during their performances. Pictures: Refilwe Modise.

Chuuch is an apt descriptor of the proceedings inside the hallowed walls of the famed theatre on Louis Botha Avenue.

The Urban Dictionary describes the expression as referring to anything sacred and when used at the end of a sentence it means “God bless”. The term was made popular by rapper Snoop Dogg in the early 2000s.

In the theatre parking lot, red and white polka dot clad choir members rehearse Beyonce’s Drunk In Love, in case they are part of the bottom two. In this scenario, the two choirs involved take part in a knockout round in a final tilt at the heavens.

The competition is brutal, the emotions are real and the choir master is nervous before the recording commences.

Previous episodes have sung of a choral competition that is not gospel-based but incorporates popular music from the past and present. But the conscious bid to divorce the show from gospel and religious sects proves futile as most hopefuls auditioned with gospel songs. That it is not a gospel show was a comforting factor for some choral masters, none of whom are in the choral arts.

But the judges, Lindelani Mkhize and Rebecca Malope, have made their fortunes from the Christian circuit and are more well-versed in music than radio personality and perennial judge of choice, Anele Mdoda.

“When I was first asked to be a choir master on this show, I really assumed it was going to be a gospel show because I had not watched the first season,” says music producer, Robbie Malinga.

“Then I was told that this would be music in general and not just gospel. The charity element was very important for me and I immediately said yes to the opportunity.

“The chance to try out something new in such an environment was also particularly appealing, especially the vocal arrangements of the songs.”

What rapper Shugasmakx has achieved in the show thus far can only be described as divine intervention.

Along with Malinga, Shugasmakx is City’s best bet to emerge triumphant at the end of this season. The Skwatta Kamp rapper cannot pinpoint exactly what put his team in the frontline in the competition, proving it is the hand of providence that has blessed his ensemble.

“I am not musically nor vocally trained, because all the singing I usually do is in the shower,” says the hip hop star.

“But I can tell if someone can sing or not, pretty much like soccer fan who believes that they know tactics better than the coach. Rap music has proved a valuable asset for me in this competition because it blends so well and easily with other genres.”

It has been a long day and the recording is running late with members of the various choirs growing weary and anxious. A lighting error halted proceedings before presenter Bonang Matheba could call the first choir out onto the stage.

Outside the main theatre an impromptu chorus has begun bellowing: “Take charge, oh Lord!” sang members from the various choirs, willing the heavens to intervene in their plight.

Others rested on the couches, watching the praise and worship before them.

After the song had done several turns with various changes of lead singers, the group which had gathered in a circle all broke out in tongues, praying in a scene reminiscent of a Zion church.

Soon the show starts, and the glittering glare of television does not deter the faithful, as they now compete for a chance to win the R750 000 cash price. Chuuch!