This quartet have backgrounds in, variously, advanced tap dancing, soap opera writing, opera singing and voice-over recording: it sounds like the setup for a Python sketch. It’s hardly the normal audition line for a mainstream musical …

“We’re all wondering which one of us does each of those things,” muses Towers.

“Oh? You should tell my feet,” says Stratton, shaking his head. 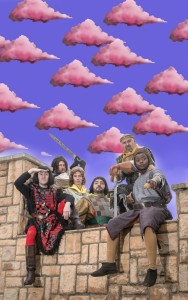 How did the audition process work? It’s a very different sort of project to pitch for.

“To be honest, we were all just incredibly excited that it came here at all,” says Urbani. “It’s so popular all over the world, and its won so many awards on Broadway and elsewhere. It’s one of my favourites; a breath of fresh air.”

“I had been out of the industry for a couple of years,” says Gilson, “and I heard about the audition and thought this was something I simply couldn’t miss. You have to do it if you have a chance.”

“I had no choice,” says Stratton.

“I’m English. It was the audition I had to get, or I’d never be let back into England. I’d be disgraced.”

A requirement, surely, is an ability to be silly.

“They want to see if you can sing and dance,” notes Urbani, “but yes, they also want to see how silly you can be without trying.”

“As soon as you try to play silly, it’s not silly,” reckons Stratton.

“You don’t really need to try, though,” continues Urbani.

“You’re standing there and the director says, ‘Okay, we’re going to sing this song,’ and the name of the tune is so silly that you think that can’t possibly be right. But then you look down at the script and there it is!”

There is a tune called The Song That Goes Like This …

Is there a certain sort of pressure that comes with being the sort of actor who fits such an oddball part?

“You get subjected to three straight hours of rigorous coconut riding. It’s tough on the shins.”

Is there a line that can’t be crossed in Spamalot?

“Life is so full of lines,” sighs Urbani.

“You can’t do this, you can’t do that; people saying how you should and shouldn’t dance … I think this show just says: ‘Let’s see what happens if you go on the other side of the line.’ And before you know it, you have a musical and you’re employed and you’re lovely.”

“I found out this past weekend that my character, Sir Bedevere, only had one hand,” says Stratton.

“That explains your dancing,” nods Urbani.

“Yes, but what does it signify?” chirps Towers. Monty Python’s Spamalot runs at the Mandela at Joburg Theatre  from July 11 to August 10.

The show is directed and designed by Simon James

The stage musical is based on the ﬁlm Monty Python And The Holy Grail.