R9 billion art collection to go under the hammer this week

A rare original copy of the US Constitution, signed on September 17, 1787 in Philadelphia (worth $15-20 million) will also be on auction. 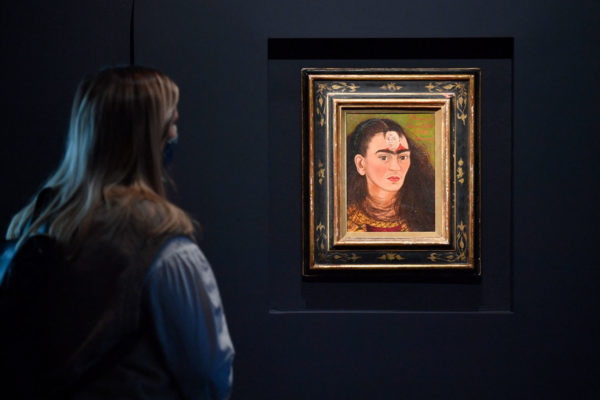 A person looks at Frida Kahlo's final 'Bust' Self-Portrait "Diego y yo" (Diego and I) at Sotheby's on November 5, 2021 in New York City. After more than a year, in-person auctions are returning to New York this week with the sale of the exceptional Macklowe collection, reputed to be the most expensive in the world to come onto the market -- and buyers are champing at the bit after the pandemic. At renowned auction houses Christie's and Sotheby's, the message is the same: the art market is doing very well. With fall sales estimated to bring in more than $1 billion in a week, starting on November 15, "this is our largest sale season that we've presented since 2015," a record year, said Brooke Lampley, president of the fine arts department at Sotheby's. Picture: ANGELA WEISS / AFP

After more than a year, in-person auctions return to New York this week with the sale of the Macklowe collection – the world’s most expensive to hit the market.

At auction houses Christie’s and Sotheby’s, the message is the same: the art market is thriving.

With sales starting November 15 estimated to bring in more than $1 billion in a week, “this is our largest sale season… since 2015,” a record year, said Brooke Lampley at Sotheby’s.

“Throughout the pandemic, there was great demand from our buyers, who weren’t experiencing the same level of supply as they were accustomed to,” she told AFP.

Experts say the pandemic has not negatively impacted the funds nor appetite of potential buyers, who are increasingly in Asia and younger than their predecessors.

“A lot of people are looking at their walls, thinking about the art they want to add to their collection, because they’re spending so much more time in their homes,” said Emily Kaplan at Christie’s, which resumes in-person auctions on Tuesday.

In September, Sotheby’s won the rights to sell the Macklowe collection, the subject of a legal dispute following the high-profile divorce of New York real estate developer Harry Macklowe and his ex-wife Linda in 2018.

The auction house is billing the pieces, worth $600 million, as the largest collection of modern and contemporary art ever put on the market.

Highlights include Alberto Giacometti’s “The Nose”, a suspended bronze the sculptor began working on in 1947, and Mark Rothko’s minimalist painting “No. 7”. Both are estimated to be worth $70-90 million.

The collection includes Andy Warhol’s “Nine Marilyns” (worth $40-60 million) and “Sixteen Jackies” (worth $15-20 million) – as well as several pieces by living artists, such as Jeff Koons, Rudolf Stingel, Wade Guyton and Tauba Auerbach.

At Sotheby’s, the evening of November 18 will be dedicated to the sale of works from the last 20 years, including two Banksy works estimated to be worth several million dollars each.

Christie’s auction season begins Tuesday with a 21st-century sale, focusing on solid bets such as Banksy works, but also a monumental painting by Jean-Michel Basquiat, “The Guilt of Gold Teeth”, which he completed in 1982 during one of his stays in Modena, Italy during his meteoric rise.

The painting, which depicts a voodoo figure surrounded by graffiti and numbers, is estimated at $40-80 million.

Digital artist Beeple’s sculpture “Human One” depicts a helmet-wearing astronaut walking through a changing environment. The piece can be modified remotely by the artist at any time, even once installed in the buyer’s house.

On Thursday, Christie’s will auction a collection of Impressionist pieces assembled by Texas businessman Ed Cox, a wealthy Republican Party donor who died in 2020.

The collection includes one piece each from masters such as Edgar Degas, Pierre-Auguste Renoir, Claude Monet, Camille Pissarro, Paul Cezanne and Gustave Caillebotte, as well as three paintings from Vincent Van Gogh.

A sales record for Frida Kahlo could be broken at Sotheby’s, which will auction off her self-portrait “Diego y yo” – valued at $30 million.

The auction house will also sell a rare original copy of the US Constitution, signed on September 17, 1787 in Philadelphia (worth $15-20 million).