A patient bride on Our Perfect Wedding

Sunday nights are always good because we have shows such as Our Perfect Wedding, which make it as far as the Twitterverse. 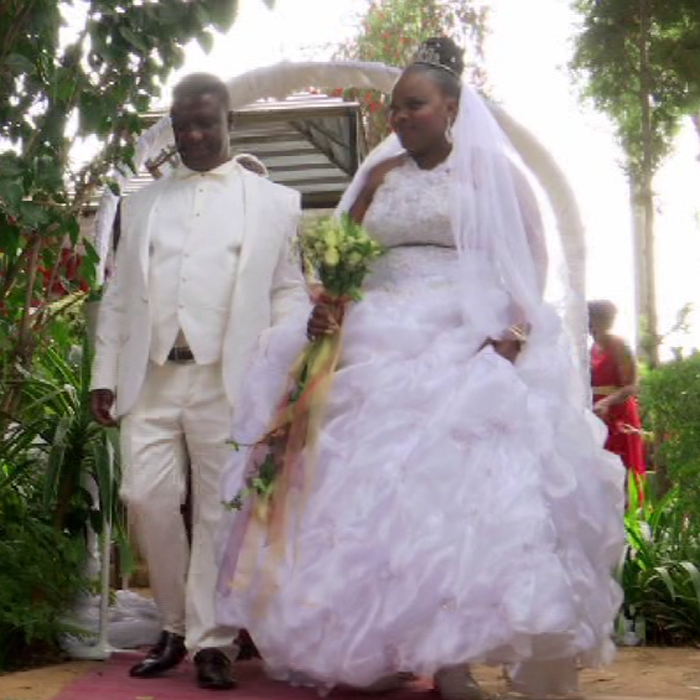 In last night’s episode of Our Perfect Wedding, we met Vusi and Thembi. When they met, Vusi was still married, and Thembi waited for her prince charming. Last night’s episode showed us indeed good things come to those who wait. Some however, come in old packages, which is still good, right? Age is just a number after all.

Vusi and Thembi started a relationship while Vusi was still married, which raised a few eyebrows at their church, of course, but in the end, love conquered. In a sad turn of events, Vusi’s wife passed on, and Thembi got her official promotion to the main lady.

Vusi did not waste time, and within a week, Thembi went from being a girlfriend to a fiancee. We guess it’s all the ‘nice’ things Vusi did for Thembi. She said he spoiled her with KFC, and when she got tired of sleeping on one side, Vusi rolled her over – who wouldn’t want that? Changing sides is a struggle, and it’s nice when someone does that for you.

As we have seen lately, a wedding gown without bling is not good enough, Thembi’s one also had bling, but it a bit too dramatic for my liking. What matters most is that she felt like a princess in it. While some brides go for nice-looking heels, Thembi went for white sneakers, with bling of course. It was a first for me, as she at least did not struggle to walk, like some walk in heels as if they are newborn calves. I must say, Thembi was a glowing and smiling bride, and you could tell she had been waiting for her wedding day for a while.

The bridesmaid dresses were not pretty, and the colour combination was not that appealing either. It was unique though, but it was not something a lot of people would go for – I guess that was the whole point.

The colour scheme however, looked nicer on the cake, as it was not too decorated. The cake stand was unique too, as we’ve seen mini cooper food warmers and ‘surprise’ cake stands, but last night’s one was really unique. 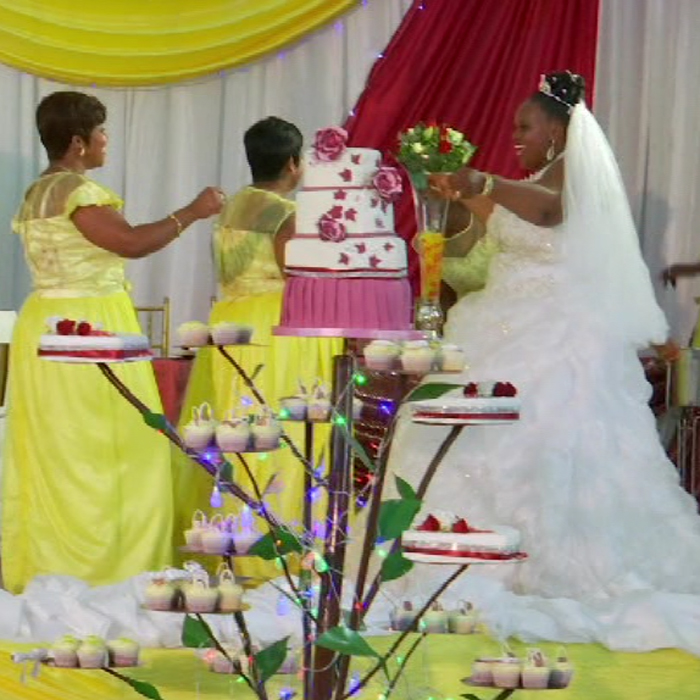 As for the speakers, one of the bishops showed us that at the end of the day, they are human. The bishop gave Thembi bedroom lessons; apparently the length of a woman’s nightdress is important. The Bishop said Thembi must wear a nice, short nightdress so her husband would always want to go back home. Well, we learn new things everyday.

In the end, love conquered – this was indeed their perfect wedding. What did you think?

I guess the colors reminds makoti of her school years when she met her BAE ???? #OurPerfectWedding

So she waited patiently in her side chick position until the wife passed away? Such manners. #OurPerfectWedding pic.twitter.com/Ah0NFeuIiA

I was 3 years old when they met. I'm 25 & they're getting married. That time I've been dumped for delayed whatsapp texts #OurPerfectWedding

@Simbagozo that nightdress guy was voicing his frustrations on his wife in a passive aggressive way! #OurPerfectWedding #OPW

Did this woman just cite KFC treats as a thing? ????????????. I just died…why our people are still far from the promise land #ourperfectwedding