Have you ever felt inadequate because your 11-year-old is more adept at operating the technology in your household than you are?

Andrew ‘Ender’ Wiggin (Asa Butterfield), an unusually gifted child, takes that role to the extreme in this science fiction story in which he is recruited to save humanity from a savage alien race.

Based on Orson Scott Card’s 1985 novel of the same name, the film has Ender as part of a group of teens called ‘launchies’ (computer literate youngsters with killer instincts and gaming skills) chosen and trained to lead the army against the Formics – the alien force that attacked Earth years prior. A still from the movie Ender’s Game

Ender’s capabilities are remarkable. He’s a natural strategist. He observes the situation before taking action, calculating the best possible solution for the proposed outcome and quickly mastering war games that will prepare him for battle. The boy is slowly turned into a killer and he is chosen to be the army’s next great warrior. He has a kind heart, though and is by no means short of emotion – indeed, that was one of the reasons for being chosen for battle school. But his sympathetic nature will come back to bite him in the end.

This is an action-packed film depicting Ender’s journey from the youngest of three in his family, petite and nimble, to his promotion to captain of the shuttle by boot camp leader Hyrum Graff (Harrison Ford). Ender manages to gain the respect of the adult troops but not without enduring some resentment from his fellow launchies. Ender also develops a fondness for female recruit named Petra (Hailee Steinfeld) and the pair become an incredible team. 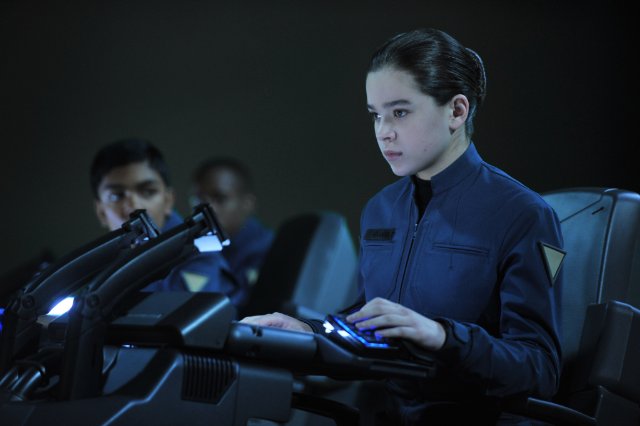 Ender becomes an icon of leadership and bravery but begins questioning the army’s assault on the Formics, who came to Earth to colonise long ago but haven’t returned since they were defeated by humans. Without cause or motivation, it seems, an unnecessary war ensues.

With the story set in outer space, it’s important that the graphics and special effects are top notch as they will ultimately play a huge role in the film’s success. Although largely focused on a sci-fi audience, there’s a strong play of emotions throughout that will broaden the film’s appeal.

The script poses some sociopolitical questions about war and youngsters being taught to fight and kill by military leaders. Video games, some say, play a similar role, corrupting the minds of our children. Though the stories in the games are not real, how much is tolerable before they begin to shape young lives?

There have been many films in the same ballpark recently in terms of the space adventure and sci-fi themes, but Ender’s Game is thought-provoking and will stay with you.