For the first time, the public will get an opportunity to see what happens during the cable car's annual maintenance. “Lunch Atop a Skyscraper” is considered one of the best photographs ever snapped.

The image of 11 immigrant workers taking a mid-air meal atop the nearly completed RCA building at New York’s Rockefeller Centre captured the imagination of the world.

The danger, the intrigue and how the image was taken for years were part of the zeitgeist. It’s also one of the first photos to ever show photography as a true art form.

At long last South Africa has its own version – of the men walking the cables of the Table Mountain cableway during its annual maintenance.

Lunch Atop A Skyscraper.

It is one of the new seven wonders of the world. Table Mountain is nature’s spectacle. Yet it’s machines and humans that have made it one of the world’s leading tourist destinations.

If you’ve ever taken a cable car ride you know how thrilling it is. But keeping the system’s near spotless record is one of the biggest secrets of the Table Mountain Aerial Cableway.

An amalgamation of wires, gears, and moving metal parts, expertly crafted with Swiss engineering and ultimately brought into the world through South African toil. All with the sole intent of taking people on a five-minute-long journey to reach the top of Table Mountain.

To many, this may sound very technical, but to Gary Hirson, it’s an art. Especially when the cableway cars are forced to halt their winding progressions and dismantled during the Table Mountain Aerial Cableway Company’s annual maintenance period. 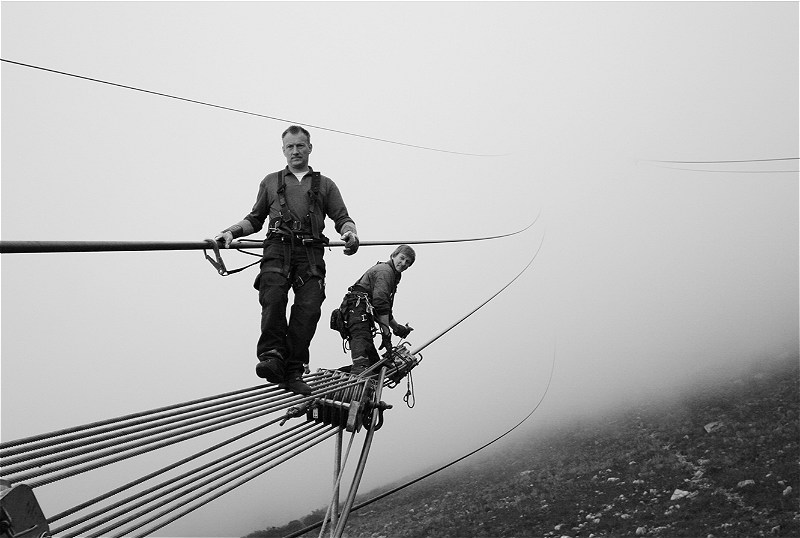 Back in the winter of 2005, Hirson was commissioned to take pictures of the maintenance process for future project manuals. Little did he know that, what was assumed to be a technical-based manual, would turn into a portfolio of artwork spanning over 15 years.

“I never thought that this was something for the public to see. I was just trying to capture the scale of the operation and men working with machines in such a unique environment.

“Whenever I spoke to people about the maintenance shutdown, I mostly encountered surprise and bewilderment as many people didn’t realise that it took place. That was how the idea of the exhibition came about – to showcase what it involves,” said Hirson.

Few people realise the importance of the cableway’s annual maintenance shutdown period, and even fewer realise the time and effort it requires to make sure such a feat of engineering remains safe and simple to use during the rest of the year.

He claimed the breakthrough that resulted in defining his work as an art form instead of a technical project was his awareness of the human side of the machinations.

“My focus is driven by the human-interest angle, the man-versus-machine relation,” said Hirson.

“It’s a lengthy process, to tell such a detailed visual story. You have to show an emotional connection with every photo, describing a story in clarity and capturing the real moments.”

His artwork is being displayed at the Youngblood Africa Gallery in Cape Town. The exhibition is currently underway and will end on 29 March.