Christie's described the 40 inch by 40 inch silk-screen work as "one of the rarest and most transcendent images in existence." 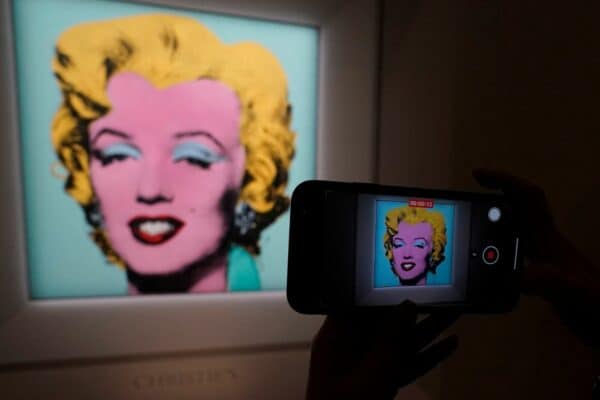 The auction house said it expects the painting to become the most expensive 20th century artwork when it goes up for auction in New York in May.

In a statement, Christie’s described the 40 inch (100 centimeter) by 40 inch silk-screen work as “one of the rarest and most transcendent images in existence.”

Alex Rotter, head of 20th and 21st century art at Christie’s, called the portrait “the most significant 20th century painting to come to auction in a generation.”

“Andy Warhol’s Marilyn is the absolute pinnacle of American Pop and the promise of the American Dream encapsulating optimism, fragility, celebrity and iconography all at once,” he said in a statement.
Warhol first began creating silkscreens of Monroe following her death in August 1962.

The pop artist produced four known as the “Shot Marilyns,” all equal in size with different colored backgrounds.

The “Shot Sage Blue Marilyn” portrait has her with a pink face, ruby lips, yellow hair and blue eye shadow set against a sage-blue backdrop.

At an unveiling at Christie’s headquarters in Manhattan, Rotter said the portrait stood alongside Sandro Botticelli’s “Birth of Venus”, Leonardo Da Vinci’s “Mona Lisa” and Pablo Picasso’s “Les Demoiselles d’Avignon as “categorically one of the greatest paintings of all time.”

Christie’s is selling the work on behalf of the Zurich-based Thomas and Doris Ammann Foundation.
All proceeds of the sale will benefit the foundation, which works to improve the lives of children around the world.