Multiple elements converge to give the audience a full, meaningful experience during Aubrey Sekhabi's Silent Voice, currently running at the State Theatre. 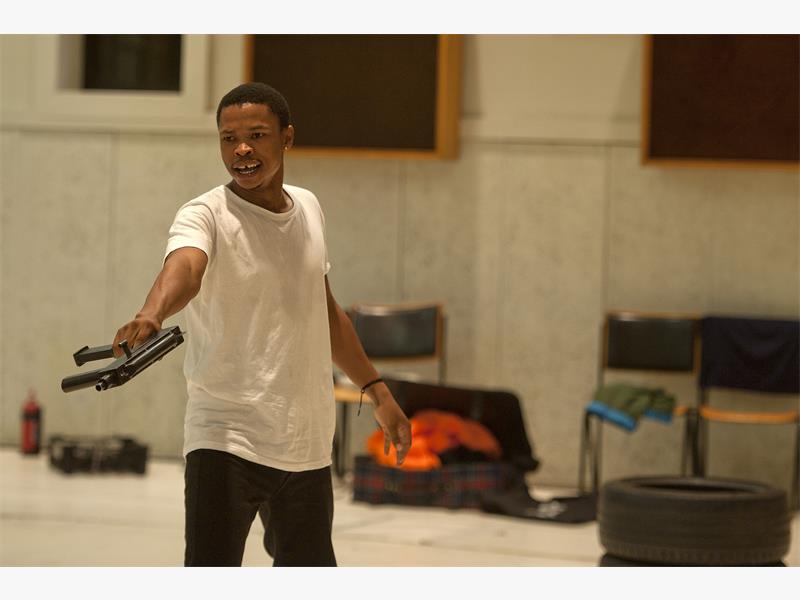 The experience starts in the corridors outside the theatre before the play begins, if it does indeed have a beginning in the traditional sense. The cast mixes with the audience in foyer, selling goods like oranges, potato chips, newspapers and all manner of materials found on street corners downtown. Initially, people are confused because they recognise the cast from their television work, but they have taken totally different personas and the goods and the day’s newspapers are really for sale. The actors even carry change with them.

It does not end there. Once seated in the theatre, the cast again interacts with audience members asking them questions and engaging in dialogue. There is also a musician on djembe drums who provides the soundtrack or score of the piece and provides other sound effects as well.

The ensemble cast does not miss a step in this high-octane heist story. A large part of Sekhabi’s direction of this piece relies on placing the audience in the minds and situations of the four characters – all criminals – and their stories. This forces the audience to experience what it might be like to be in a hostage situation, and more than anything, to help people realise that the character’s stories are something that they recognise and connect with.

Set in modern-day South Africa, Silent Voice is the story of a group of criminals who go out to rob a cash in transit vehicle. During the robbery, the guards are murdered, and a shoot-out ensues with the police. The criminals escape with the loot, avoiding arrest as they make their way to a safe house. During this journey their individual stories unfold: their dreams and secrets are revealed and trust disappears.

Intertwined in this tale is a not terribly subtle commentary on various topics that currently dominate public discourse in South African politics. Sekhabi’s text is rich, connected and paced intelligently to compliment the thrilling action of the piece. Issues of land ownership are touched upon, Bible verses are interpreted interestingly, and we were reminded of the fragile race relations locally.

Although harrowing in some instances, the play is also funny and witty and the use of street slang proved a treat for the Pretoria audience. Every member of the cast is utterly immersed in their roles, carrying the audience with them from start to finish.