It was a celebration of the absurd. No logical thread or justification for some of the utterances rendered as "comedy" could be established. The Comedy Central Roast Of Kenny Kunene was a crass affair laden with foul language on a night where professional comedians were outshone by the “celebrities” on the roast panel. Trying to make sense of the purpose of the entire endeavour was a futile exercise.

The roastmaster, English comedian Jimmy Carr, gave an interesting perspective on South Africa from the word go and his knowledge, presumably gained via careful research, seemed very impressive in the beginning as he drew huge laughs from the excitable audience. The eagerness of the crowd and the anticipation
of the event made the early exchanges shocking and cringeworthy, which set the tone for the rest of the night.

When Carr took a stab at those on the roast panel there was palpable shock and laughter when he asked: “If Khanyi Mbau is here tonight, then who is manning her post at Oxford Road?”
Carr then went on to take further jibes at South Africa and her nuances, which rang true, given that they came from a foreign observer. But as the proceedings formally began it was clear that gags directed at Khanyi Mbau’s private parts would be the order of the day.

As the night continued the shock tactics from the panel lost their lustre and it all became sadly predictable. If the focus was not on Mbau and Dineo Ranaka’s philandering ways it was placed on actor and choreographer Somizi Mhlongo. Subtle homophobia dressed up as mirth was common. Crass jokes about gay sex were most successfully aimed at Mhlongo and radio show host Rian van Heerden. Van Heerden took the jibes in his stride and proved to be the funniest roaster on the panel. He was witty, had excellent comedic timing and his delivery was excellent. He left no stone unturned. 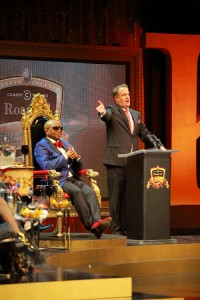 It was an interesting roast panel, including PJ Powers and Jack Parow. A lot of old age and dinosaur jokes were directed at Powers – mostly not suitable for print. Her hit song Jabulani was also the centre of attention. Parow was attacked for being a poor rapper with no talent at all.

It has been suggested that some of the material used by the non-comedians in the roast panel for Steve Hofmeyr was written by a team of writers who were appointed to make sure that the material was funny. That certainly didn’t seem to be the case this year, as everybody adopted the same approach with every panel member they roasted.

For Kunene – supposedly there to be taken down a couple of notches – the roast did not serve its intended purpose as he emerged arrogant and proud of his superstar life. Jokes about his time in prison also did the rounds, but these were expected. The roasters took more memorable shots at each other than they did at Kunene leaving him more convicted (as it were) than ever that his way is the right way.