Meghan Markle and Prince Harry are expecting their second child

'The Duke and Duchess of Sussex are overjoyed to be expecting their second child.' 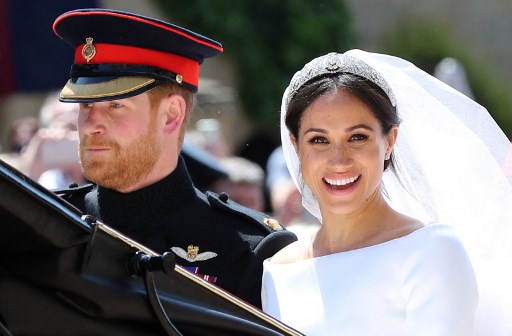 (FILES) In this file photo taken on May 19, 2018 Britain's Prince Harry, Duke of Sussex and his wife Meghan, Duchess of Sussex begin their carriage procession in the Ascot Landau Carriage after their wedding ceremony in Windsor. - A judge will issue a ruling on Meghan Markle's privacy claim against a newspaper group for publishing a private letter she wrote to her estranged father on February 11, 2021. (Photo by Gareth Fuller / POOL / AFP)

“We can confirm that Archie is going to be a big brother,” the spokesman said, referring to the couple’s son. “The Duke and Duchess of Sussex are overjoyed to be expecting their second child.”

The couple released a black and white image of them under a tree, all smiles, with Markle showing signs of pregnancy.

They have launched several legal cases against news outlets alleging invasion of privacy — including one that ended on Thursday with a victory against Associated Newspapers in the UK.

The cases have attracted criticism from some, as the couple are also launching themselves into the public eye with high-profile projects such as a Spotify podcast in which Archie made a brief appearance. Meghan, Duchess of Sussex, holds her son Archie as she and Britain’s Prince Harry, Duke of Sussex, meet Archbishop Desmond Tutu and his wife Leah at the Tutu foundation in Cape Town on 25 September 2019. Picture: Henk Kruger/Pool/AFP

Meghan Markle on Thursday won her high-profile privacy claim against a British newspaper group for publishing a private letter that she wrote to her estranged father.

The Duchess of Sussex, who is married to Queen Elizabeth II’s grandson Prince Harry, brought the case against Associated Newspapers after extracts of the 2018 letter appeared in 2019.

Judge Mark Warby ruled that Meghan had a “reasonable expectation that the contents of the letter would remain private”.

The letter to Thomas Markle was written a few months after Meghan married Harry, and asked her father to stop talking to tabloids and making false claims about her in interviews.

The judge called it “a personal and private letter” about Meghan’s own behaviour, her feelings of anguish about her father’s behaviour — as she saw it — and the resulting rift”.

The newspaper group’s defence team argued the publication was to correct inaccuracies in a previous article in the US magazine People.

But the judge said the extracts published were “manifestly excessive and hence unlawful”.

Meghan, 39, welcomed the ruling, and thanked the court for holding Associated to account for what she said were “illegal and dehumanising practices”.

She accused the Mail on Sunday weekly, its daily sister title the Daily Mail and the MailOnline website of exploiting individuals like “a game”.

“For me and so many others, it’s real life, real relationships and very real sadness. The damage they have done and continue to do runs deep,” she added.

“The world needs reliable, fact-checked, high-quality news. What the Mail On Sunday and its partner publications do is the opposite.”

Lawyer Mark Stephens, who specialises in reputation management, told AFP that “this is a very big win for the Duchess of Sussex”.

“Essentially she will be able to turn round now and say she’s been vindicated, that the letter was private and should never have been published,” he said.

The amount of damages that Meghan will receive has not been disclosed.

The judge also granted summary judgment in relation to most of a claim by the Duchess over copyright.

But he said the “minor” issue raised by the defence of whether Meghan owned the full copyright of the letter or was a co-author should go to a limited trial, after claims that royal officials helped Meghan to draft it.

Warby said suggestions that she was not the sole author of the letter, and that the Crown could share the copyright, “cannot be described as fanciful”. They warranted further investigation, he said.

It was not immediately clear if that meant Meghan would have to give evidence.

The judge said a March 2 hearing would discuss costs and the remaining copyright issues.

Associated had called for the privacy case to go to a full trial but Meghan’s lawyers argued the claim had no realistic prospect of success.

The news group said it was “very surprised” by the judgment and “disappointed at being denied the chance to have all the evidence heard and tested in open court at a full trial”.

A decision on whether to appeal was being considered, it added.

Mark Stephens told AFP that Associated Newspapers was “almost bound to appeal” against the ruling over the issue of whether the letter was in any way “public-facing”.

If the ruling is overturned, this would lead to a full trial, he said.

The newspaper publishers had argued that witnesses were needed to “shed light” on whether Meghan was planning for the letter to be made public as part of a “media strategy”.

But Meghan’s lawyers described the letter as “self-evidently private” and denied she intended the letter to be made public at any point.

They also denied she collaborated with the authors of a recent biography on her life with Harry, which also contained partial extracts of the letter.

They have launched a number of legal cases against news outlets alleging invasion of privacy, including over paparazzi shots of their son Archie.

This has attracted criticism from some, as the couple are also launching themselves into the public eye with high-profile projects such as a Spotify podcast in which Archie made a brief appearance.