It is not yet known when Liesl Laurie and Musa Mthombeni started dating as this is the first time they have gone public. 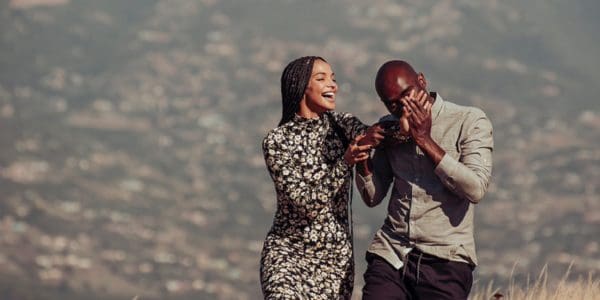 Liesl Laurie, who now works as a radio presenter on Jacaranda FM, previously dated Idols SA host Proverb for a few years before they went their separate ways in 2018.

Laurie’s new fiance happily shared how he is going to marry the “love of his life.”

This is my fiancé. The love of my life.

It is not yet known when Liesl Laurie and Musa Mthombeni started dating as this is the first time they have gone public.

In early June, the pair hinted at where the relationship could be going when Mthombeni shared an Instagram reel captioned “stressful girlfriend” featuring Laurie’s hand. In the video, she gestured at her ring finger, questioningly.

In April, Laurie shared an emotional picture of herself crying. Opening up, she shared how she felt overwhelmed and that people should start normalising sharing their bad days on social media.

“I remember scrolling past a post from @natasha_joubert about everyone having a bad/overwhelming day/week every now and then and I related to it so so much. Little did I know that my overwhelming and exhausting day was just around the corner.

“I’ve been feeling sick, and thus feeling sad, overwhelmed, exhausted, impatient, anxious, needy… We have all been here in this “breakdown” spot, and if you’re asking me, I say that is COMPLETELY OK. What stuck with me about Natasha’s post was “showing up 100% for everything (work, gym, family time) so I just like her showed up 100% for this crying session too.

“My ouma always said that tears cleanse the heart & the soul,” her caption read.