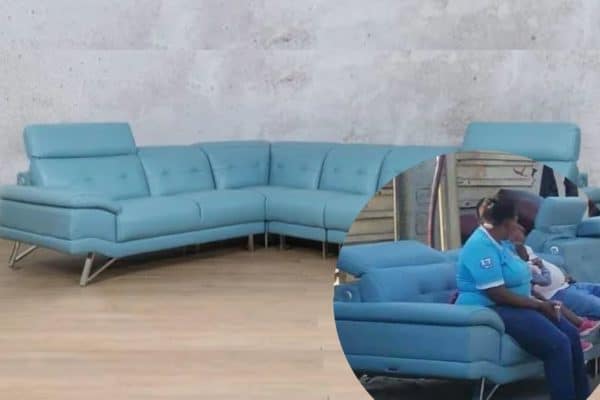 The looted blue couch was recovered slightly damaged from an informal settlement in Quarry Road, Durban, a few kilometres away from the store it was taken from. Picture: Leather Gallery

The looted blue couch was recovered on Monday and TimesLive reported that the owners of the store where it was taken from were on their way to the police station on Tuesday to confirm whether or not it was the couch in question.

The publication also reported that a police source had alleged that the looted blue couch had been “cut in pieces”.

The R70,000 San Pablo corner sofa had been taken from Durban’s Leather Gallery weeks ago at the height of the unrest that led to looting and violence in KwaZulu-Natal.

It was later spotted on the pavement in an informal settlement, leading to countless memes and jokes on social media that became subject to a police investigation.

Police have since been on the hunt for the looted blue couch and other stolen items in an effort to recover them.

It has been reported that some of the recovered items would simply be disposed of.

Hundreds of people have also been arrested in connection with the looting, as well as the incitement of the violence that led to the looting.

Brands across South Africa have also stepped up to offer assistance to those affected by the looting which led to brief food shortages in certain areas.

The aftermath of the looting and violence continues to affect many, with people losing loved ones who were murdered during the chaos, areas losing ATMs, shopping malls, banks and employees of the stores having to close down in an effort to rebuild their stores and replenish stock on shelves.