Vicky Visagie and Gert Johan Coetzee insist that there is no bad blood between them despite their decision to divorce after 17 years. 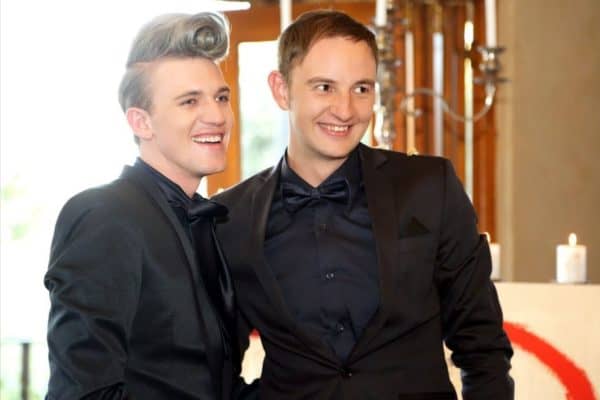 Gert Johan Coetzee and Vicky Visagie during their 2014 wedding which was broadcast on SABC3's Top Billing | Picture: YouTube

Acclaimed South African fashion designer Gert Johan Coetzee and his soon-to-be ex-husband Vicky Visagie recently agreed to feature in a YOU Magazine interview about their “happy divorce” after initial reports claiming that their marriage had become toxic.

Visagie and Gert Johan Coetzee made headlines back in August when Sunday World reported that Visage had moved out of their marital home after some trouble arising from the fact that they had reportedly fallen out of love.

The pair invited YOU Magazine to that same home to unpack why their relationship was coming to an end after 17 years together.

The couple, who met in 2005 and got married in 2014, simply say that their marriage has run its course and have therefore decided that they would be better as friends than lovers at this stage of their lives.

“They still care for each other, and realised their relationship has run its course. We [are] not sure in terms of business because they were partners in the business as well,” an unnamed source told the publication.

Visagie further slammed claims of toxicity, explaining that he was headed on a new spiritual path in his life that required him to move to a new space.

“Yes, I have moved out of our house about four months ago. But the reason for moving out is because I am a spiritual healer and needed more calmer energy so I can be able to do my work and heal people, while Gert is busy with his business,” according to Visagie.

Visage and Coetzee had often been hailed for their working relationship which saw Gert Johan Coetzee devote himself fully to the creative process of his brand while Visagie handled the business side of things.

Fans are curious to see how things will play out now that they are no longer married.

READ NEXT: The best celeb looks according to Gert-Johan Coetzee