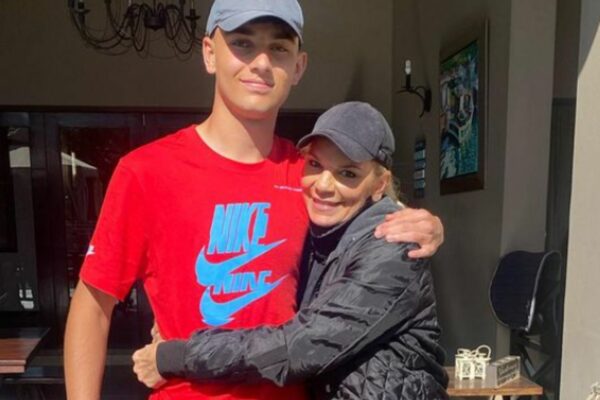 Amore Vittone and Joost van der Westhuizen’s son, Jordan, 18, has just returned from Valencia, Spain where he has been playing football for the past six months.

But he’s only back for a few weeks and then heading to Ireland to further his career in football.

Earlier this year Amor, took to Instagram and bragged about her son’s achievements.

Jordan had been scouted for two weeks to train and play in Valencia, Spain as an open U/23 goalkeeper. He was invited to stay and play on trial for Club Valencia Football Academy for six months.

“That gives him the opportunity to get signed with any club in that time frame, or stay in Spain,” wrote the proud mother.

Amor has been sharing various posts about her son’s football journey on Instagram, saying that he is loving the 10-hour training days and the lifestyle, while also doing online schooling with a tutor from South Africa.

Last month the singer took to Instagram to say how proud she is of her son and the Valencia team who won the league.

“[And] Jordan (goalkeeper) had a clean sheet winning 6-0,” Amor wrote in her caption.

While she is happy to have her son back in South Africa for a couple of weeks, everyone is also excited to see what he will be achieving next.

“He is leaving for Ireland, to represent Valencia Spain (as their U/28 goalkeeper) in the Youth Super Cup football tournament in Ireland, against top-notch teams such as Rangers, Liverpool, Man U etc,” Amor said in her latest post.

“So glad to see my son and proud for doing the travelling all on his own,” she continued.

Amor’s children both seem to be rather talented in sports, with her daughter Kylie also making waves in the show jumping scene.