The real story behind Cassper ‘popping the question’

The Americans have Kim Kardashian to break the internet, we have Boity and Cassper. 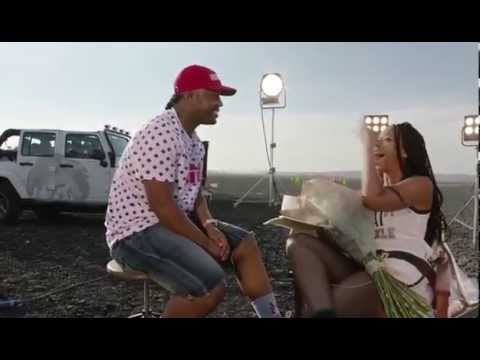 Cassper Nyovest (real name Refiloe Phoolo) and TV presenter Boity Thulo have been teasing the Twitterverse since the wee hours of today. They have been sharing the front page for this week’s Drum magazine, featuring them with the title “It’s official; Cassper pops the question and Boity says yes”.

By noon it was widely established the two were engaged, but Cassper and Boity had a second bombshell to drop.

But what really happened on the day?

Boity says: ”I was on the set of the Legit Summer range shoot, and I really didn’t know he’s going to be asking me out. It was the same time he had just moved into his new house, and I was texting him the whole day trying to find out where he was, and thinking ‘like what’s happened to him’. Then he walked out onto the shoot with all the flowers…”

According to Boity, she initially thought he was a total dork, but realised that was his special way of asking her to be his girlfriend.

“He just really wanted to ask me. I was just kept in the dark.”

As it turns out, it was planned – with a splash of PR for legit clothing to boot. Since this afternoon, both have been tweeting #itslegit, as confirmation for their relationship – but also subliminally marketing Legit Clothing.

“But it felt incredibly romantic, even though I was basically at work,” Boity giggles.

Cassper’s love life has been tabloid fodder for a while, especially since his scrutinised relationship with model Amanda du Pont.

“I’m glad it’s out there. It’s going to make it easier for us to spend time together without all that (gossip). But I’m a very private person in my love life,” Boity points out.

While the two might have struck the jackpot when it comes to love, Drum magazine could strike the jackpot in terms of sales when the edition hits the streets.

Following the first teasers of the front page, it gave the magazine’s website almost 16 million page views and over 11 million unique visitors.

On social media, Paper Magazine exploded. In terms of print, publishers needed to order an additional 35 000 copies of the magazine.