Political icon Winnie Madikizela-Mandela’s black Xhosa traditional attire fits her granddaughter Zoleka Mandela perfectly, as if it was specifically designed for her. 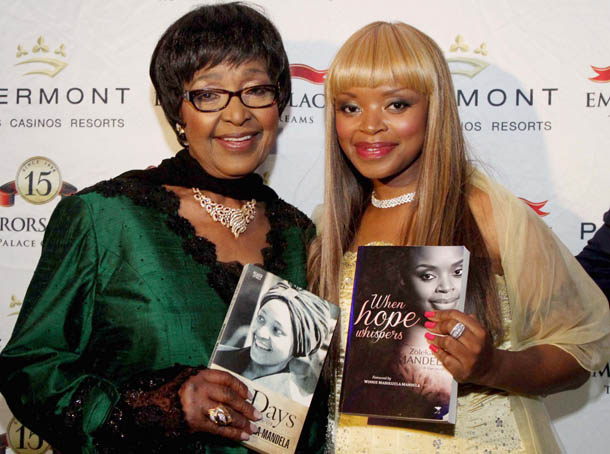 Zoleka smiles and says: “My grandmother dressed me up this morning. I’m wearing her clothes. It fits, but realistically, there are bigger shoes to fill.”

She adds: “She called me and said ‘darling, I have a perfect dress for you to wear at the media launch’. So, she dressed me literary from jewellery to the perfume … I have such an amazing grandmother.”

Madikizela-Mandela has been a pillar of strength in Zoleka’s life, hence she regards her as “my day one and the closest person to me”. As women throughout the country celebrate National Women’s month, Zoleka, on the other hand, celebrates the fifth year of her sobriety as a recovering alcohol and drug addict this month.

“Having abused alcohol and drugs for 17 years of my life, you can imagine the chaos and the shame I brought to the family and to have her (Madikizela-Mandela) say today ‘I am proud of you for doing this and that’. She is an extraordinary woman. She was one of the people who had my back. She gave me the benefit of the doubt,” recalls Zokela.

She said it was after the death of her daughter, Zenani, in 2010, that she took herself to rehab. But, she says, she is happy she is at a place in her life whereby “I have gotten myself together” and able “to thank my grandmother” for the support she gave her throughout the years.

“I wasn’t able to say thank you to my grandfather and my daughter. It’s nice to do something that focuses at other people’s needs and contributions.”

She says she was addicted to drugs and alcohol because, “briefly, it has a lot to do with the physical and sexual abuse I encountered. I had a very low self-esteem, anger, no confidence and lots of blame because I always felt like these things happening to me, must be because I deserve it.”

Zoleka said she had a lot of support from her family, but she didn’t know how to ask for help. “I would encourage people to speak out and not to be silent because that’s what kills you.”

Having gone through a lot of challenges in life, including being diagnosed with breast cancer, does not make her believe she is different from other people. She says there are other people who have gone through worse things than her in life. In a move to make a positive change in other people’s lives, Zokela gives motivational talks on her experience as a breast cancer survivor.

On Fridays, she goes to Charlotte Maxeke Hospital where her social upliftment foundation, the Zoleka Mandela Foundation, runs “a refreshment distribution and give tea to the cancer patients”.

She believes little things make a positive change in other people’s lives.