Thousands of kwaito music fans came out in numbers to say farewell to their star Sbusiso "R Mashesha" Khomo of Big Nuz at the King Zwelithini Stadium in Umlazi on Saturday. 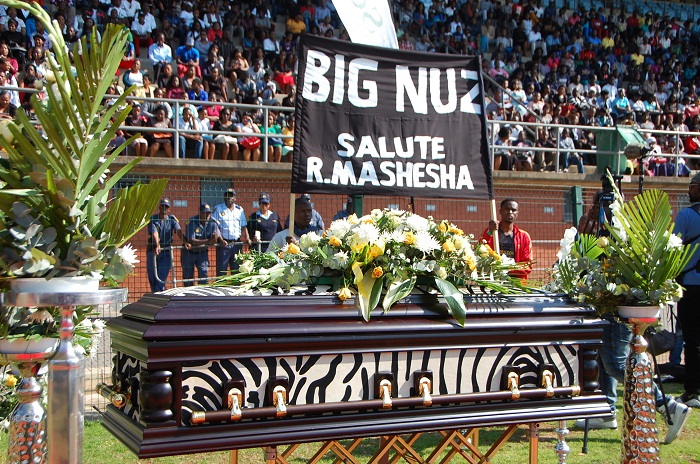 The coffin of the late Big Nuz member R Mashesha lay at the King Zwelithini Stadium with a huge banner showing respect to the artist. Picture: Phumlani Thabethe

The fallen star died last week Friday after an operation. It was a sad goodbye for his family and friends and a great loss for his fellow group members Mampitsha, Danger and their boss DJ Tira who sat together on the front row of the VIP marquee.

Sadness and pain was written on each of their faces as they lost a colleague they spent most of their time with touring locally and internationally.

Mampitsha could not hold back the tears as he remembered his friend whom he said he knew even before they established the group. “We hope that his passing would bring us, the remaining members of Big Nuz even closer.

“One thing we know for sure is that there will never be another R Mashesha. We are going to miss him for a long, long time and we hope that he will become a good ancestor to the group.”

He said the biggest challenge that R Mashesha left behind for them to continue the group without him. “We may in future consider getting a replacement, but we believe that nobody would replace him. He was a uniquely talented man, who gave a lot of respect to music,” said Mampintsha.

Hip Hop musician Ricky Rick said Big Nuz’s music had a lot of influence in the hip hop genre. “Big Nuz was the reason why we put kwaito into hip hop. My music is influenced by them and I look up to them as a young musician from KwaMashu.

KwaZulu-Natal MEC for Arts and Culture Ntombikayise Sibhidla Saphetha said the province had lost a lot of artists in a space of just weeks. “We first lost the legendary David Masondo and in just weeks we lost Maskandi musician Mtshengiseni Gcwensa and in few days time we heard of the passing of R Mashesha. These are people that we were proud of as they come from our province,” she said.

She encouraged young artists to follow the good example of R Mashesha by becoming professional artists. L’vovo Derango said he will always remember R Mashesha as a humble yet very talented musician.

R Mashesha’ brother Siyabonga Khomo thanked the music community for the love and the support they offered his family in their time of loss.

He singled out Afrotainment boss and the group’s manager DJ Tira for the support and for making the funeral a success. He said DJ Tira and Tzozo Zulu had stood with the family and did all the running around doing the preparations of the funeral.