According to a report from the International Music Summit, South Africa is responsible for the largest consumption of electronic music worldwide. Spoek Mathambo is at the forefront of electronic music in SA. Picture: Supplied

Rapper and songwriter Spoek Mathambo (real name Nthato Mokgata) told Think Africa Press that some of the country’s biggest songs were produced on a simple home computer – a catalyst for South Africa’s diverse electronic music scene. Even the country’s poorest regions are home to pools of leading DJs and producers, many of whom are using very rudimentary methods.

This movement is unpacked in Mathambo’s first full-length feature, Future Sounds Of Mzansi – a documentary aiming to explore electronic music as a staple element of South Africa’s popular culture. Mathambo says, “For years, there’s been a strong movement of producers, instrumentalists, vocalists and, most importantly, party-goers, giving themselves to new ideas around African electronic music. Still, in a country steeped in poverty, crime and injustice, South Africans party like their lives depend on it.”

As the winner of the Young Director Award at the 2011 Cannes Lions International Festival of Creativity, Mathambo is already known for his visual talents. To add to that, he has employed film-maker Lebogang Rasethaba.

“When Nthato approached me to make the film,” says Rasethaba, “it was an easy ‘yes’. We have worked together often. The subject matter was novel and I felt privileged to document something that was almost foreign yet so close to home. The South African electronic music world is a universe of its own, with multiple layers and ecosystems. There’s been an entire paradigm shift; producers across the country are out there making ground-breaking music from their bedrooms with the bare minimum, so no one has any excuse to not realise their dreams any more.”

Rasethaba grins: “We had truckloads of footage, hours of interviews and two heads full of loose ideas.”

The film does not, however, aim to be an account of the history of electronic music in SA. 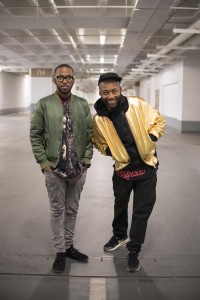 “Our mission was simple, to meet up with … a potent gang of electronic music pioneers sculpting the future,” says Mathambo.

When asked about the impact this musical revolution has had on communities, Rasethaba explains: “It has given people a sense of ownership, a voice, and an identity in something that’s being celebrated all over the world. I feel honoured to have been able to attach faces to that movement by capturing intimate portrayals of the most prolific electronic musicians in the country.”