Real Goboza featured the latest news and gossip about Mzansi celebs and took viewers inside all the hottest, exclusive events. 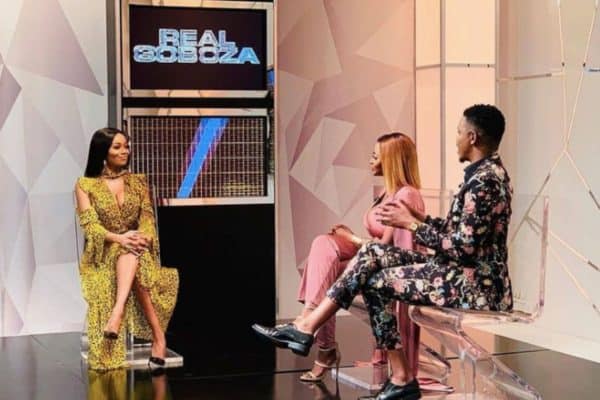 The fact that SABC1 celebrity gossip and entertainment magazine show Real Goboza is coming to an end this year is a really sad moment in the history of South African pop culture.

Many have tried to argue that after 14 years on the air, it is time for the show to come to an end but what will fill the very noticeable vacuum it will leave?

The show – produced by Urban Brew Studios – first aired on 27 June 2007 and was hosted by then YFM DJs Dineo Ranaka and Trevor Noah.

Shot in studio and on location, Real Goboza featured the latest news and gossip about Mzansi celebs and took viewers inside all the hottest, exclusive events.

Contrary to what many believe about gossip and entertainment shows, RGB’s main aim was to celebrate the media and those people who’ve achieved recognition in it.

Noah and Ranaka’s stint on the show was so short-lived that many may not even remember that they ever hosted RGB.

They were replaced by fashion journalist Kuli Roberts and Siyabonga Ngwekazi (also known as Scoop Makhathini), who hosted the show for two seasons.

Shock Jock Phat Joe and actress Brenda Ngxoli came on board in season four and Nxgoli was later replaced by Queen Sono actress Pearl Thusi towards the end of season five.

After that, Sinazo Yolwa, Donovan Goliath and Amanda du Pont came on board and Yolwa went on to outlast them all.

She currently co-hosts the show alongside Samora Mangesi, with Muvhango’s Mulisa Mudau as insert host.

The end of ‘Real Goboza‘

While it is not exactly clear why the show is coming to an end, many have assumed that the coronavirus pandemic, as well as the lockdown and all that comes with it, may have had a hand in RGB’s demise.

When contacted for comment, Yolwa said: “The end of RGB is certainly the end of an era for SA pop culture and the entertainment industry.”

“Personally, I’m sad to say goodbye to a show that has been a big part of my life and my journey in the industry for so many years. I’m looking forward to my next great adventure, wherever that may be,” she added.

Yolwa’s sentiments were echoed by TV writer and producer Pfarelo Mulondo, who said the end of RGB was definitely a loss for pop culture.

“RGB coming to an end is quite sad because, besides bringing the audience the hottest and freshest celebrity gossip, it also covered dope events across the country and it gave a lot of people (on and off the spotlight) opportunities to flourish within the industry.”

Perhaps the best perspective on this moment in history comes from creative content specialist and producer, Lumko Johnson.

“Absolutely. I think it important to acknowledge the role the show has played in giving viewers a front-row seat in the lives of celebrities. Through the years it became an assembly point for a lot of people who may have been caught up with their own lives and didn’t catch the Sunday paper or [an] internet link.”

He also captured why the role that RGB played could not be compared to, and replaced by social media.

“Shows like RGB become the credible reference point for celeb stories. News can break on Twitter, but RGB offered a space for lengthy conversation for the subject in those stories to share their side, so that you can see and hear it from the horse’s mouth.”

Johnson concluded by saying: “We need to stop assuming that the whole country is on Twitter just because we are. The majority of the 3-5 million viewers RGB has would rather use their data for WhatsApp and Facebook.”

Events, the social scene and all things celebrity may have come to a screeching halt under the current circumstances we live in, but the pandemic won’t be around forever, and once we begin to find our way through a new normal, we’re going to need a show like RGB.