'Survivor' host Nico told the castaways that in the end most of them would be sitting on the jury and would not be judging the remaining players for being nice. 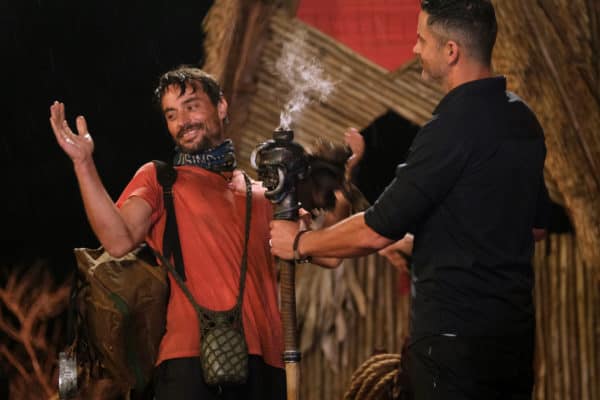 It was a big sigh of relief for Wardah at Tribal Council on Survivor South Africa, Immunity Island’s ninth instalment as the voting almost sent her packing. But it was Shaun, who said he was taking no prisoners in the first few minutes of the show, who was sent to the chopping block.

In the aftermath of one of the biggest blindsides in the history of Survivor, this episode saw a reshuffling of numbers and old tribal alliances focused on rationing opponent numbers.

Presently it is a game of voting blocs with two double agents in between, Anesu and Santoni, and Amy trying her hand at fake news but failing.

It is a Survivor narrative that is seeing the wallpaper players being thinned out as the slippery slope to the final nears. And it is quite the muddy mess as the Wild Coast weather rains and shines on Osindile. Shaun was not the only islander whose journey came to an end. The rooster’s stay was cut short, too, as it became dinner.

“To get the pizza…. The thought sunk to the bottom of my stomach and there is a long way to go because I am so hungry,” said Kiran before this week’s Survivor Rewards Challenge. Osindile was split into two, with odd-number Santoni getting to bet on the winning set. At the end, pizza and beer waited for the winning team in a ball-balancing obstacle course.

Team Orange, comprising allies and foes including Wardah, Chappies, Amy and Renier, enjoyed the spoils and discovered a clue about an Immunity Idol hidden on Immunity Island along the way. Santoni, who anticipated the presence of a clue, called herself the “idol whisperer” and blamed herself for always giving access to idols away, and possibly misplaying hers.

“People like Santoni cannot keep their mouths shut,” said Tyson and early on the Shaun, Amy and Nicole alliance tried to expose her double-dealing to Kiran. But it was kind of old news as Santoni’s two-faced antics were well applied last week in the run up to the culling of Marisha.

In the middle was Shaun whose anchoring function in his alliance had to be broken. Santoni just wanted him out because she could not stand him.

Wardah was sent to Immunity Island by Kiran, who won the Immunity Challenge for a second week in a row. The strategic consultant showed off his mental agility in a memory game with Anesu again a runner-up. Nicole did not fare too badly, neither did Anela and Tyson.

The tide in the Shaun alliance turned its attention from Santoni to Wardah with Amy convinced that Santoni, whose fate she believes is hanging by a thread on the opposing side, would eventually return to their fray.

Meanwhile, Anesu’s go-between tactics continued, although not as brashly as Santoni’s. But her concern seemed to lie with the iffy-ness of her relationship with Tyson. But in a numbers game, relationships do not matter as much as the strategic rationalisation of opposing votes.

At Tribal Council. Survivor host Nico told the castaways that in the end most of them will be sitting on the jury and would not be judging the remaining players for being nice. The miff expression on Marisha’s face said it all though, and clearly, she is not over the stunt pulled on her the week prior. At least alliance mate Shaun will join her on next week’s jury, likely after a very long shower.

Voting was close. Wardah, concerned. Counting the number of votes against her, and the audience not seeing how everyone’s vote went in the end at the credits, means someone on her own extended alliance may be a snake in the grass.

Survivor is broadcast on M-Net every Thursday night at 7.30pm.

'Survivor SA' finale: Will Chappies win or is there a twist on the horizon?
1 week ago
1 week ago

'Survivor SA' finale: Will Chappies win or is there a twist on the horizon?
1 week ago
1 week ago