It was heated instalment of 'Survivor SA', with a backfiring blindside and a Tribal Council that rifted the castaways. 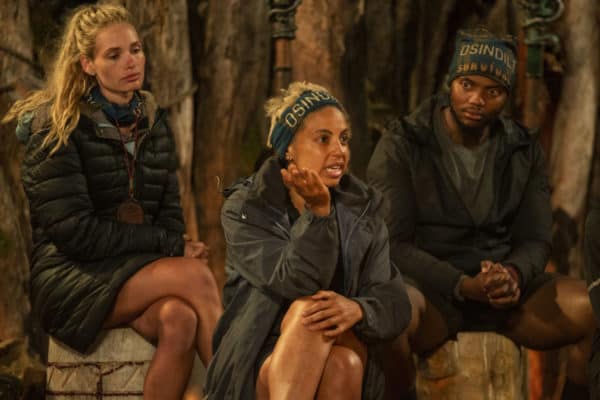 It was a heated Tribal Council in 'Survivor SA' this week. Picture Supplied.

It’s getting wild on the Wild Coast and when she left, Wardah’s final words made her dislike for castaway public enemy number one clear. “Good luck guys don’t let Chappies win,” she yelled backwards.

The castaways saw the back of Wardah after an explosive Tribal Council rounded off a brutal episode of Survivor South Africa: Immunity Island.

Tyson, in several moments of rage, called Chappies “F**ng selfish.” Nicole added to the barking and Santoni, clearly aligned, jumped to his defence with Kiran’s eye-rolling a silent vote of support for his dwindling alliance. It’s finally game on like never before in this season.

In his game-play, Chappies secretly helped himself to the tribe’s rice over time, building up additional strength to compete effectively. In fact, he seems to have had his own secret kitchen a few metres away from camp where he stashed and cooked food late at night.

Bulking up for this week’s Immunity Challenge was particularly important to him this week as he swore revenge on Anesu’s exit last week, Wardah clearly in the crosshairs of his survivor game. Former double agent Santoni closely saddled beside him.

At the Survivor Rewards Auction, a few folks bought letters from home with Nicole bagging the begging bowl and a pass to Immunity Island, Tyson an Immunity Challenge Advantage and Chappies a huge tray of sweets and cake.

Others also got some food and Kiran lost his cash to an empty basket. Of course, in another strategic move, Chappies broke the rules and smuggled some of his win back to camp, likely as an aid to his immunity bulk-up.

Wardah chose rice for the tribe instead of vetkoek and mince for herself. What nobody knew was that when Anesu exited, she handed Chappies her Tribal Council Pass.

This became the second weapon in his arsenal as Chappies beat Tyson in a brutal Immunity Challenge. Nicole used her Immunity Island ticket for herself and won the challenge, along with Tribal Council Immunity and the Fire Idol.

Santoni, still holding an Immunity Idol, was the target of Wardah’s unsuccessful blindside. Chappies and Santoni tried to get Nicole onside, but it’s not clear whether this survivor effort got anywhere.

At Tribal Council, Chappies gave his Tribal Pass to Anela, eliminating his vote but also saving him from exit. Nicole held immunity and Santoni played her idols despite Wardah’s transparent attempts at making her feel safe. Just as well she did, as Santoni garnered most of the votes. But the voting was the least of the excitement.

Tyson and Wardah took on Chappies by busting him for everything he has been doing on the side. This, including the fact that he held both flints in his bag. Wardah, who in turn tried to secure her stay threatened to walk off with the tribe’s rice if she gets voted out. But Chappies replaced it with a bag of sand in her backpack.

The tension was palpable. And on top of this Chappies outed everyone for stealing meat and taking it back to tribe at the previous rewards give. Nico had to adjudicate, and, in the end, the bag of rice was returned to Wardah, who left it behind anyway, when she was snuffed out.

What is clear is that Chappies and Tyson are arch Survivor enemies now. Santoni is aligned with the former and Tyson is left wanting without the other half of his power-couple play. Nicole and Smash would have to either align between themselves or pick a side. Next week is the final opportunity for idol-play as the crescendo of the season now approaches rapidly.

Kiran would also have to make up his mind as, after Tyson, he is verges on the danger zone.

Survivor South Africa: Immunity Island is broadcast on M-Net every Thursday at 7.30pm.